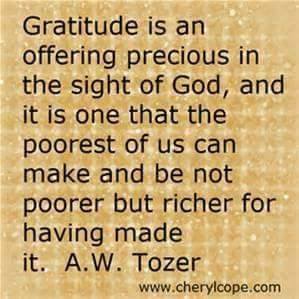 Like most of you, we enjoyed a family gathering and Thanksgiving feast. Mike was the chief cook and I was in charge of the program. Our expressions of gratitude were by means of a game. First, I read my friend Rachael Phillips' post: Thanksgiving 2017. Then everyone, even the little ones, had five minutes to make their own "weird list of things they were thankful for." If they didn't know how to write, they could draw. Everybody was involved. Those were the only minutes of silence in the whole day! But the conversation that followed when everyone read their lists was very lively. Great fun! Some 200 items made the lists, some abstract, like humor, love, vulnerability, openness, worship, friendship, etc. Items listed by someone else were crossed off. Karen and Malachi had the longest lists. And Jude interpreted what his drawings represented. He won the children's category.

One item on my list was the ongoing watercolor class This week we attempted our first larger painting applying some of the techniques we'd learned. 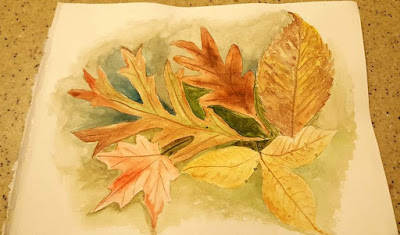 The highlight of the week was our family togetherness--outdoor and indoor fun.

Zion shared his new birthday cards. Can you tell what game we played? 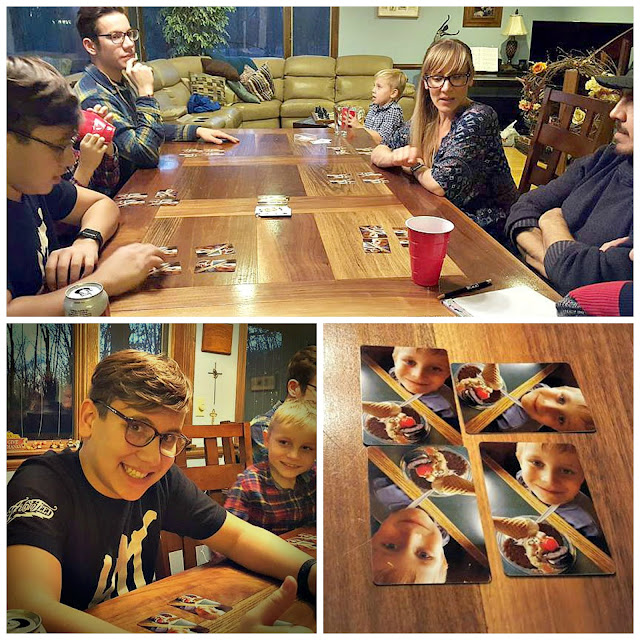 Skye was here with his girlfriend Cassie. The only one who couldn't come was Matt, as a millwright he often has to work odd hours and holidays. 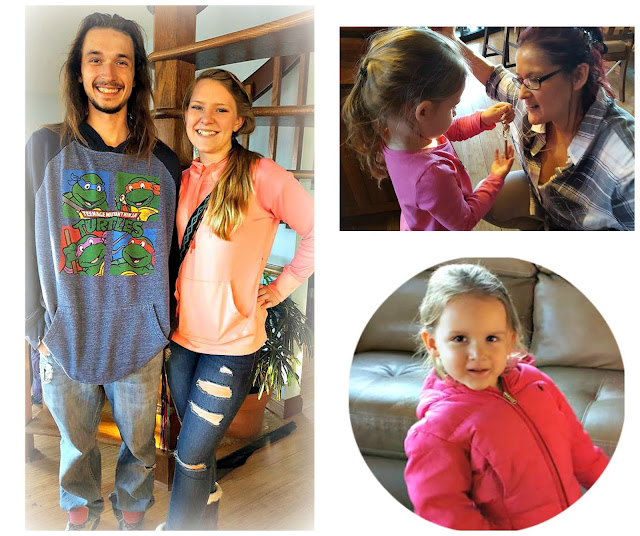 I'm sorry I didn't get a picture of everyone. I was too busy enjoying the growing family. Yes, the younguns are growing in stature, knowledge, wisdom and grace. Two of them celebrated birthdays this week: Malachi is now 19, and Zion 8.

How did I find time to color the most complicated design this week?! Ha! Too many tired evenings relaxing watching listening to TV with Michael. 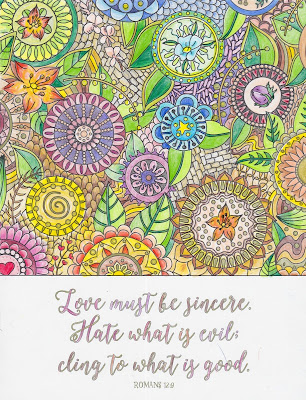 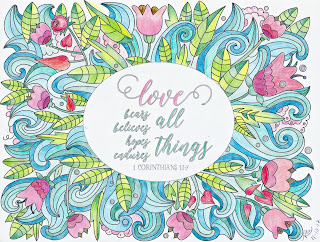 This week I lost the brother I welcomed almost 70 years ago. I am grateful for the time we had him and the love he shared with everyone. He left us too soon but suffers no more.

The week was full as always. Life goes on. Monday after class I met with friend Julia at a fancier restaurant. I ordered their specialty soup, French onion, by chance, also unaware of what the scissors were for--to cut the cheese! 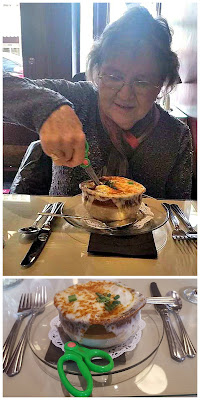 That evening, Stephan's meal was well attended, including a visitor from France and two from Thailand!

We had a new art teacher who led us through a series of techniques, showed us what different brushes do, and gave us some of his small sample pieces. 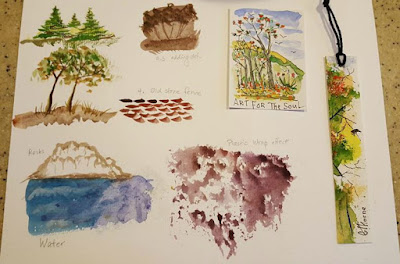 Kayla had asked me to take Rebecca to a special party at the library celebrating Mo Willems, the author they had been reading during story time. Here she is posing with the characters: Pigeon, Piggie, and Elephant.

Thursday evening, Moriah and I drove in to Muncie to MadJax to surprise her mother for her birthday. 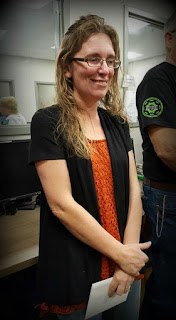 While there, we got to see all the many activities going on. Michael and a few students were assembling BattHawks, the volt meters for robot batteries they designed and will be selling. 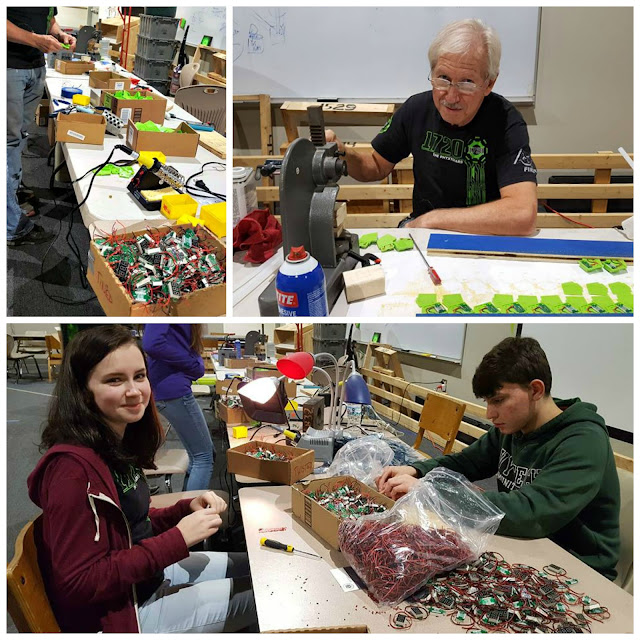 In another area a young FLL team (FIRST Lego League) was busy preparing and practicing for the competition weekend. 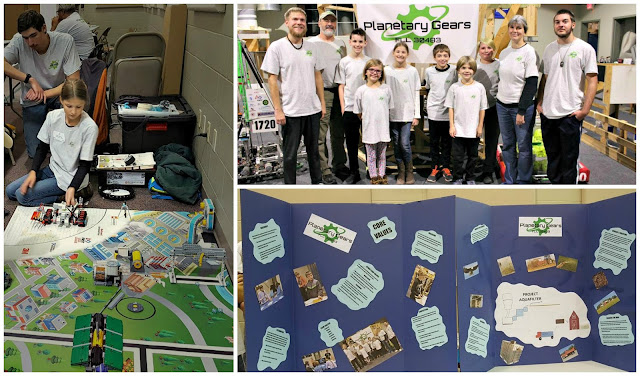 Friday, after a busy day, we got away. SIL Kim welcomed us with a wonderful Thai soup before we headed over to the Grace College Little Theatre. 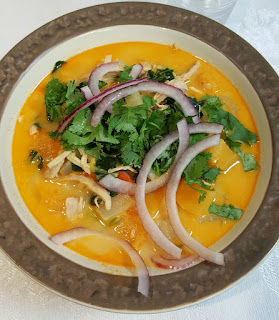 As proud grandparents we were very entertained by the debonnaire Professor Jordan in the play "39 Steps."

We spent the night at Ivan and Kim's, slept long and well in their comfortable guest bed, and were treated to a wonderful breakfast. It was so good to linger and visit, a rare opportunity.

We then ate lunch with Mother in her dining room in the Assisted Living area of Grace Village.

That evening our resident student actually went on a "pick-a-date" event and had so much fun! 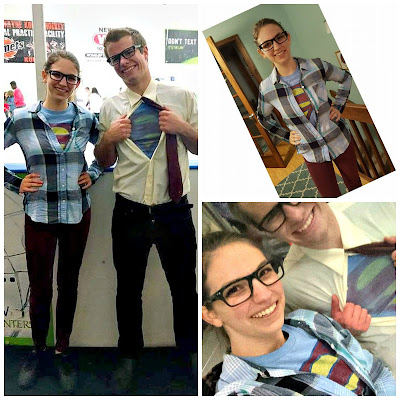 Otherwise she is doing homework ALL the time, sometimes upside down just for variety. 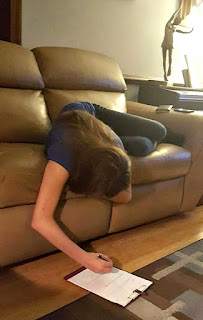 We have so much to be thankful for all the time, not only in this season set aside to focus on Thanksgiving. Will you be making a list this week? I'd love to hear what you are especially thankful for.

Can anyone claim on their tombstone to have loved in this way?

Last Sunday, as I was publishing the blog post, thanks to energy from our generator, at the church, by candle light and the hard work of many, the annual Kidoli's spaghetti dinner was prepared and served to an unusually large crowd. (Maybe there was no other place to go in our darkened town!)
These cute young servers raise money to go shopping and fill Christmas boxes for children in other countries as part of Operation Christmas Child. Always a fun community event became memorable! 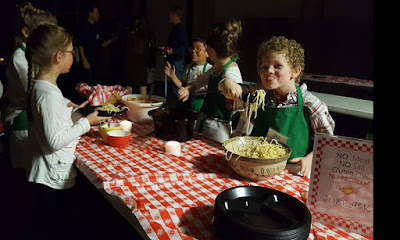 Tornadic winds hit the area not too far from us. Structural damage and power outages hit parts of Muncie and surrounding areas. This did not affect the building where I teach, but Michael could not work at the robotics shop as planned, nor Kayla at her dance studio across the street. The weather did not affect Monday dinner, tho' still cold and rainy. Friend and neighbor walked over through the mud.
We continued the weekly art get together even with only three this week. I was determined to rescue some early failed or incomplete pieces from the first class where we experimented with washes and masking. I added some touches of color to bring out what I had meant to say. We tried out Leah's water color pencils and watched a tutorial on painting a grove of trees.


Thursday, I spent the afternoon with Mother who seems to be doing well even though she'd had another minor fall. Again we read old letters, some of Aunt Margaret's with more details about a very difficult situation the missionaries had to confront and deal with back in 1960. 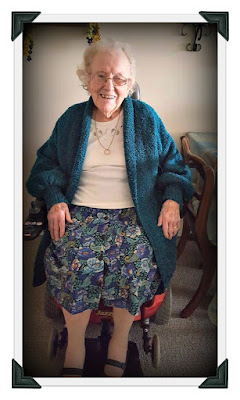 Contact with my high school classmates is ongoing, in fact I had two phone conversations this week! One with Helena who lives in Italy and another with Vicenta in Berazategui, Argentina.
Someone posted this old photo of our school. 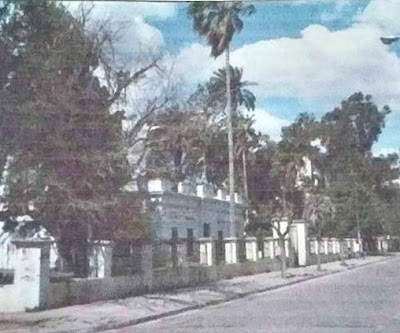 Friday there were several posts that reminded me of a holiday I'd forgotten, Día de la Tradición to celebrate an era of Argentine history--the life of the gaucho (cowboy).

The holiday commemorates the birthdate of José Hernández, the author of the epic poem Martín Fierro, about the life of the gaucho. I looked for my copy of the book we read and studied in school.  I also found another one given to me by a friend, parts of the Bible written in poetic style and language of the Martín Fierro. Both are so fun to read, wish I had more time. 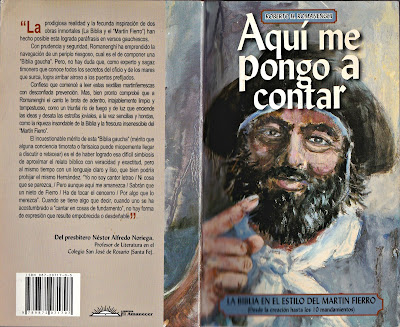 Saturday, of course, was our holiday to remember and recognize our veterans.
Stephan carved a sculpture of the iconic Iwo Jima statue for an event in Illinois. 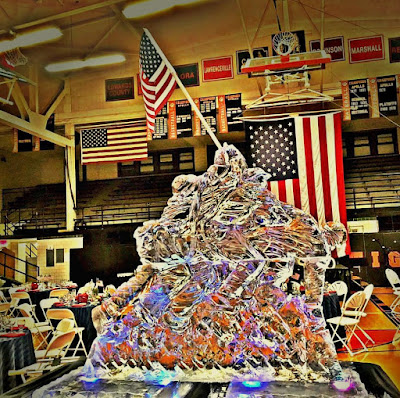 Sunday was our belated family birthday celebration of Samuel's 39th! These are always special times together. My favorite moment was when Sam was going through all the photos I had scanned the day before--his life from baby to young adult. A small crowd gathered to enjoy, reminisce, comment. It is always interesting to hear what and how our children remember their life experiences. Photos are wonderful sources for details of events and surroundings.

Since he was 12 or so, Sam asked for a skateboard for his birthday every year. This time though he asked for "more of the same" the only one he got was the teeny tiny one Leah skillfully painted for him.

Posted by riTa Koch at 10:54 AM 1 comment: Enlaces a esta entrada 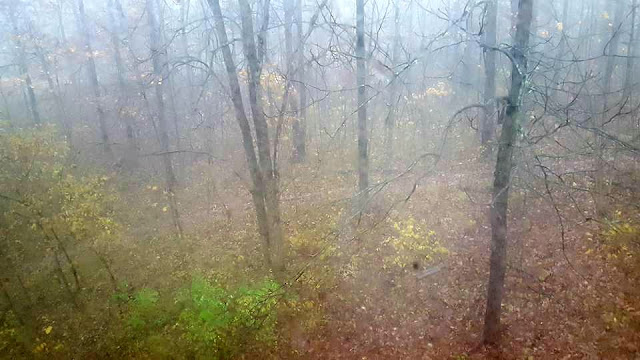 What a downpour! Power is out. Thankful for a generator.

The huge surprise of the week was actually reencounters. Some classmates in my high school graduating class started a group on Facebook. They searched long and hard and found me! Read this blog post from 2010 to understand how unlikely and unexpected this is--High School Graduation.

We are all scattered, a few no longer with us, and some have yet to join the group. Daily chats and posts slowly bring back faded memories and renew friendships. We share photos and stories. Most of us had forgotten the graduation ceremony. One was able to locate the button pinned on our uniform by a parent.

Monday after class, lunch and shopping, I went to cover for Kristie who had a job interview. I was welcomed by smiling pumpkins, and played Skipbo with the "Mad Scientist" when he got home from school. A while later Kristie arrived with Captain America. 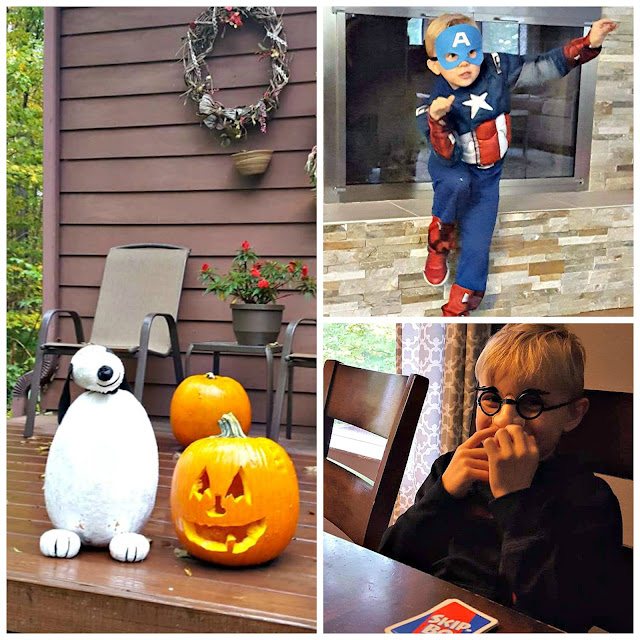 Tuesday was the last class our friend Jason had committed to guiding us in water-color techniques. However, we decided to continue meeting with whoever can come, and invited another local artist to join us. 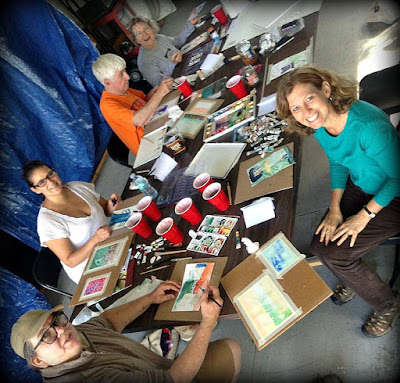 That evening Leah had fun welcoming interesting visitors. Do you recognize anywone from the art club? 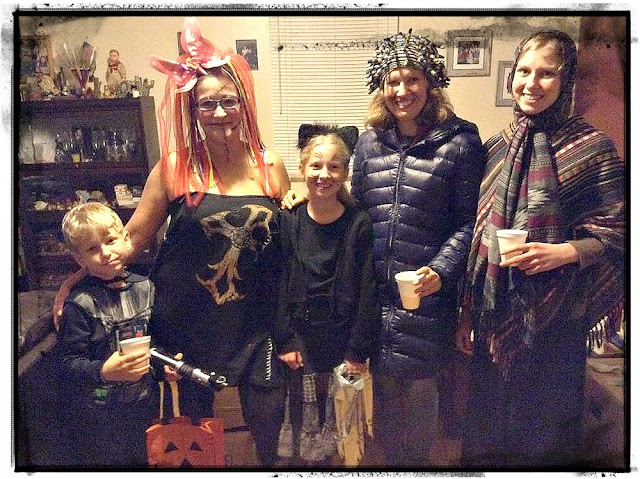 I, on the other hand, had only one "trick-or-treater" show up, and may have frightened the cute little unicorn. 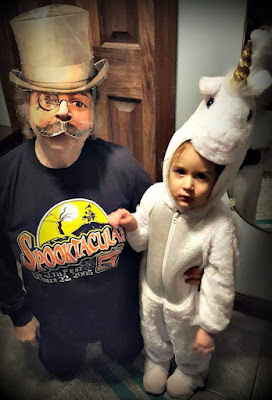 However, she got over it quickly and took over my camera to get a picture of her escorts. 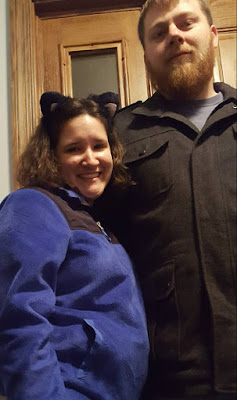 The next day was their anniversary, six years already!

Thursday (sometimes referred to as TBT--Throwback Thursday), I had fun restoring, scanning, posting some of Stephan and Karen's old photos that forever grace their fridge. 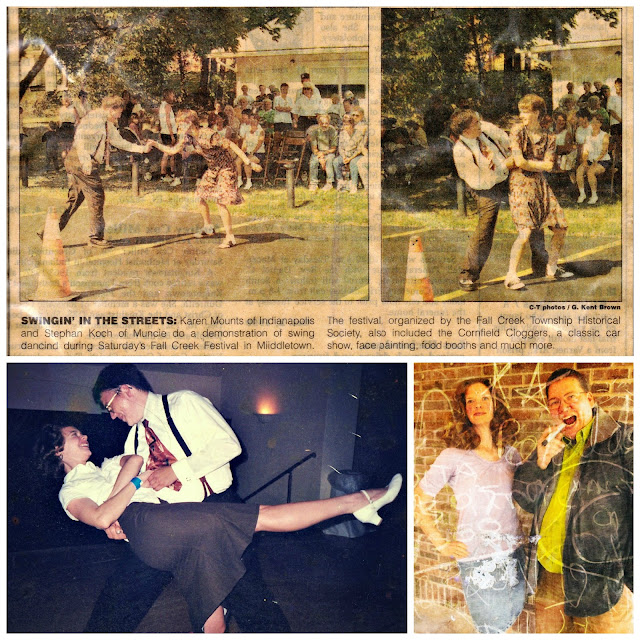 I took the lower left photo when we first met Karen. They remember how long they had to maintain the pose till I managed to get the shot I wanted.
In the lower right they were playing members of the 80's show, the A-Team, for a skit at church.


Friday, our sleep-deprived resident student was off to class early. I just had to get a photo of the presentation-worthy attire which had required some consultation with friends.


I spent the morning arranging all Mike's pottery at the Gray Barn for the 7th Annual Upland Holiday Arts and Crafts Festival the next day.

Klaytivity--Mike Koch's Unique Thrown Pottery, filled the entire counter. Hard to believe so many pieces remain after selling and giving away  again that many over the years. Everything was 60% off--priced to sell!

Here are a few of his unique pieces. Which two do you think sold? 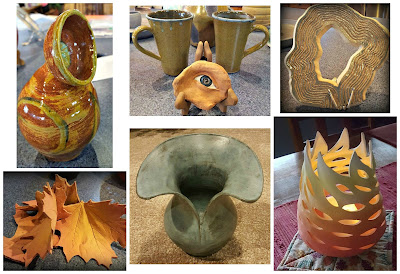 I had volunteered to be there Saturday, 9:00 - 4:00, so Michael went off to work at MadJax.
He said I could keep the money. Not bad for a day's wages. The best part, though, is talking to people.
I had one special little visitor, but failed to get a picture until she was walking away. 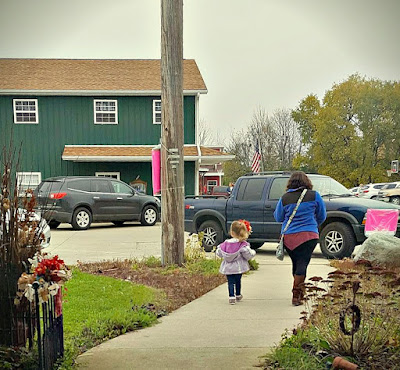 Any big happenings or surprises in your week?
Posted by riTa Koch at 5:41 PM 2 comments: Enlaces a esta entrada