Four out of seven days were spent mostly away from home and this house looks like it too.

Sunday evening, however, we relaxed and played chess.
For Christmas Sam made his dad a beautiful board and it is now always on display.
I asked Mike to teach me. He agreed, but may have been sorry a couple times. 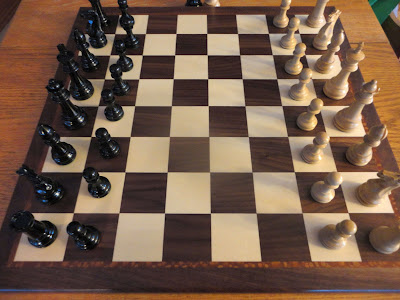 Monday was the long awaited Mother-Daughter Sew Biz class. However, Leah's glasses broke so I went alone. I had forgotten that I was to do some homework before the class. And, as often happens, life was busy enough that I didn't even open the serger Mike got me a year ago until that morning! Even so, everything went well and I accomplished the task for that session--a table runner and napkins. I am very happy with this tool which the teacher called "the microwave of sewing,." and look forward to teaching Leah everything I learned. 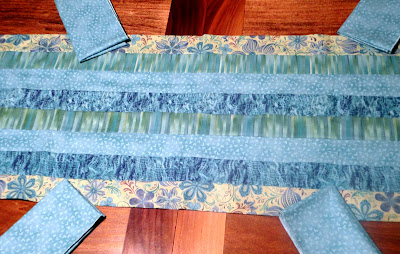 The rest of the week was rearranged somewhat to be able to help Sam's family when their little ones came down with RSV.  I had never heard of this disease. Anyway, baby Jude was hospitalized.
I spent Tuesday with Zion and the older boys when they came home from school. 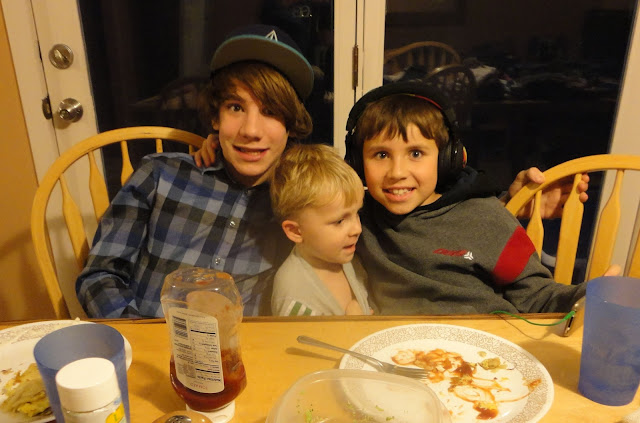 Wednesday, Sam hung out with Zion.
Kristie was disappointed to learn that baby was not well enough yet for them to go home. This was the Instagram pic she posted on Facebook.


Thursday Zion was feeling much better and we had a good time together. 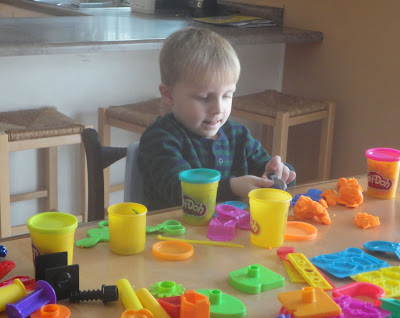 Mom and baby came home in the afternoon! Another Instagram pic. Thanks, Kristie!


Meanwhile, Michael remains intensely busy every day and most evenings is mentoring the robotics team also.


Friday is his day off. We were invited to Leah's for chocolate fondue.
We got to see her latest cheerful touches to brighten the kitchen. 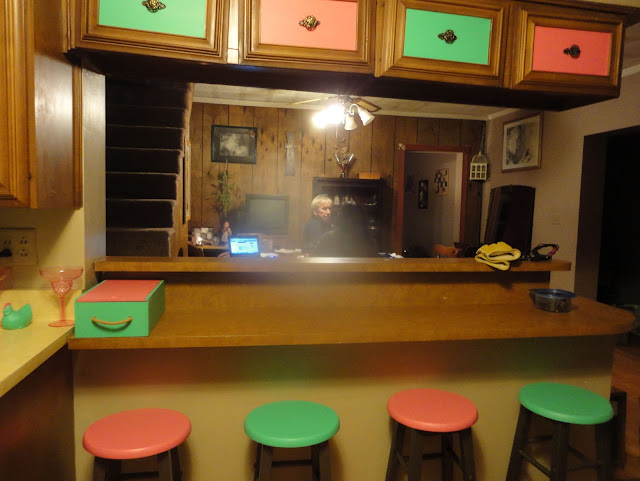 Saturday was a special Elijah-Grandma day to celebrate his 8th birthday, Sunday the 27th.
We began a tour of Garfield statues in the area--five down, twenty to go. It may take till next birthday to complete the series.
Here's one example:


After a Happy Birthday sundae at Ivanhoe's, we came home and Elijah had fun playing in the snow. 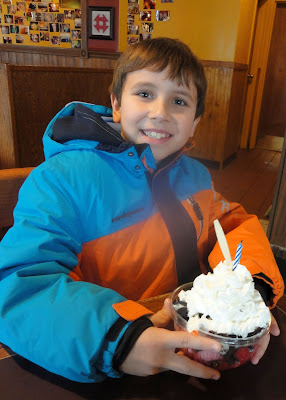 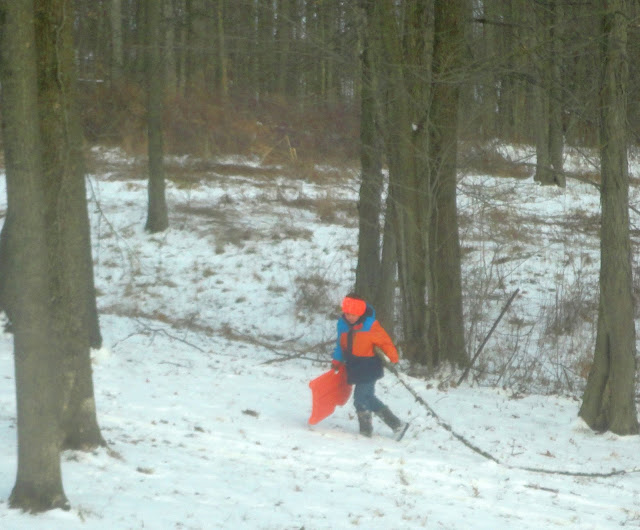 Earlier in the week a small herd of deer were playing in the falling snow. 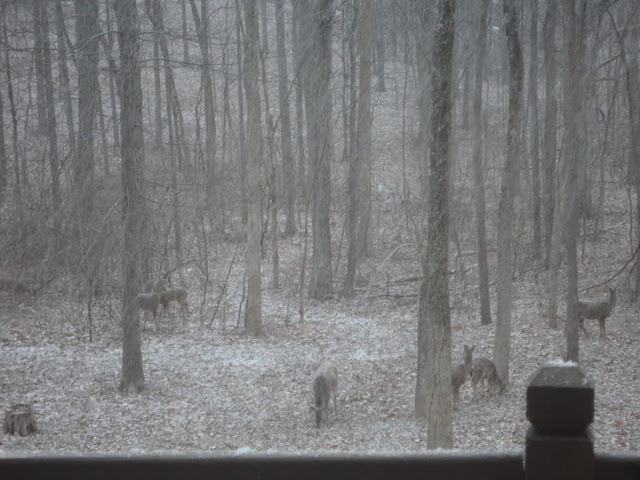 Sunday slipped by photoless.
However, I discovered some lost photos from the previous Sunday taken at Gina's house. These two are my favorites. Her new front door by Sam's Custom Woodworking inscribed in Hebrew: Barak shem Yehovah (Blessed be the name of the Lord.) 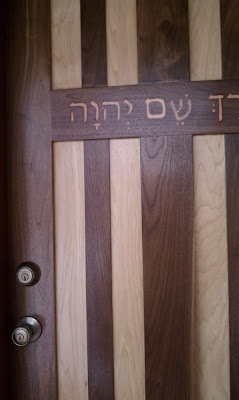 DIL Karen and one of the sweet little guests at Gina's 3 King's Day party. 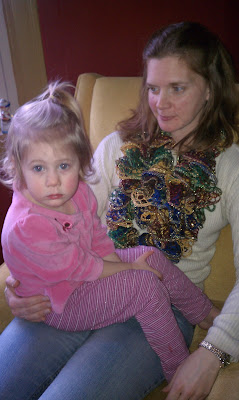 I'm on my own now most evenings during these six weeks of robot build-season. I was glad to have several  dinner opportunities. Monday night, of course, it was at Stephan's.
Nanxin entertained us with more Chinese stories. She says there are hundreds because their culture is so very old. The ancient stories are reduced to four word sentences. So when someone says "Fox borrows tiger's power" everybody knows what it's about. The mighty tiger walking through the forest had never met the fox. When fox claimed to be the king, tiger challenged him. But clever fox said, "I'll prove it to you, just walk behind me." As they went all the animals fled. 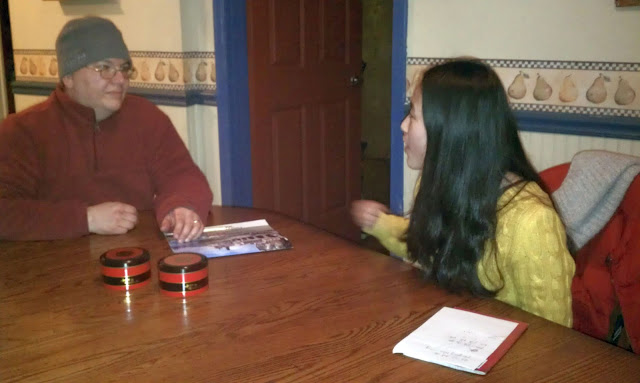 Tuesday we had two visitors.
Mike S. from OM (the mission we worked with for many years)  stopped by for lunch and fellowshipon his way through from OH to Indy. Of course we took him to Ivanhoe's. 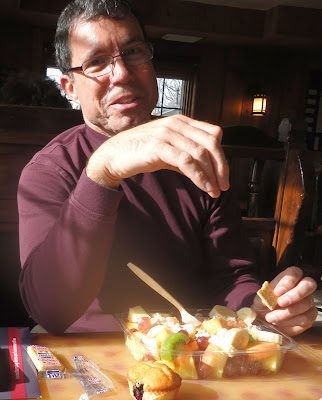 He brought us some OM materials including a bracelet made by women rescued from trafficking. I love it. 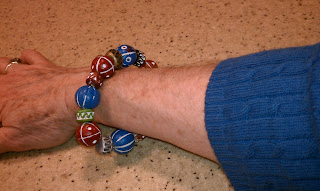 We were delighted to have Sara's husband Steve spend the night after dropping Jared off at school.
Sara sent delicious pumpkin bread, at Mike's request ;-), 'cause she's always posting food photos. 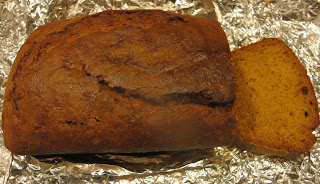 Steve left the next morning after we wearied him with many questions and stories, but no euchre this time.
We were having such great conversations that I didn't get the camera out until it was almost too late. 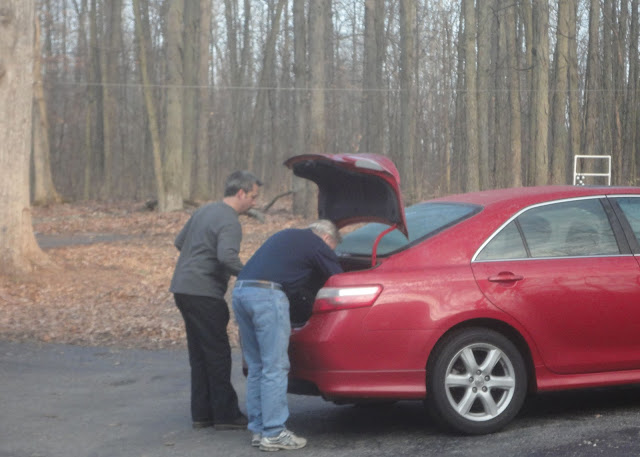 Leah invited me for dinner Thursday--fun time, delicious food, house redecorated. She has been digging out old treasures and hanging art on her walls. 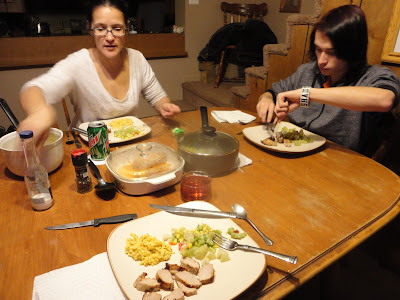 I brought one portrait of Skye home to frame it. 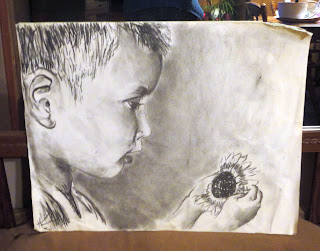 My mother invited me to join her Friday for a church dinner and missionary speaker, so I drove up to Winona Lake in the afternoon.
When I visit her church I reconnect with people from the ancient past. The Covers were missionaries in Argentina when I returned as an adult and taught in a Christian school for several months. He helped me start a journalism club and guided in the production of a few school periodicals. 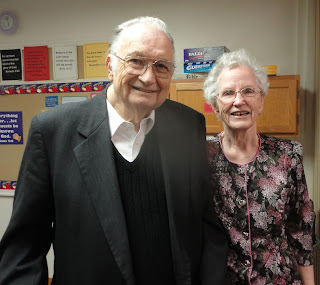 When I visit my mother I stay overnight in her extra bedroom. As I was driving away Saturday morning I realized I had not yet taken a picture for TLMacdonald Photography's weekly challenge--this time a panoramic, so I stopped and tried that feature on my camera.

And now it's good to be home again!

One more thing, I promised to let you know about the YouTube video of the chapel service where Mike spoke. It was posted this week: January 7, 2013 Taylor University Chapel.
Posted by riTa Koch at 11:57 PM 7 comments: Enlaces a esta entrada

When I looked back at the week, I recognized some significant events and very few photos. To fill in the gaps I am resorting to digging up or borrowing pictures.

Sunday, January 6th, Epiphany or Día de Reyes (Day of the Three Kings or the Magi)

Our friend Gina has a Three King's Day celebration at her house every year--lovely decorations, lots of food and fellowship, a piñata for the children--i.e. FUN! I took several photos, but they disappeared mysteriously.

Mike had to leave early because it was the first day of build season for the robot that will compete in the Ultimate Ascent game, basically frisbee golf! 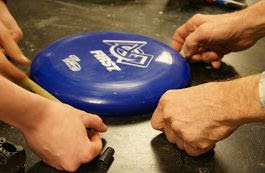 Let the calculations and brainstorming begin! And the six-day six weeks of intense focus and work!

Thanks Team 1720 for these photos.

Mike's other commitments have not ceased, only increased!
Monday he spoke in chapel at Taylor University. It was a wonderful opportunity to look back and reflect on all God has enabled him to do. There should be a You Tube video ready some time this week. I will let you know.

And the Red Barn after-school pottery sessions continue as usual, Monday, Wednesday and Friday. These highschoolers were quiet and hard at work when I peeked in one afternoon. 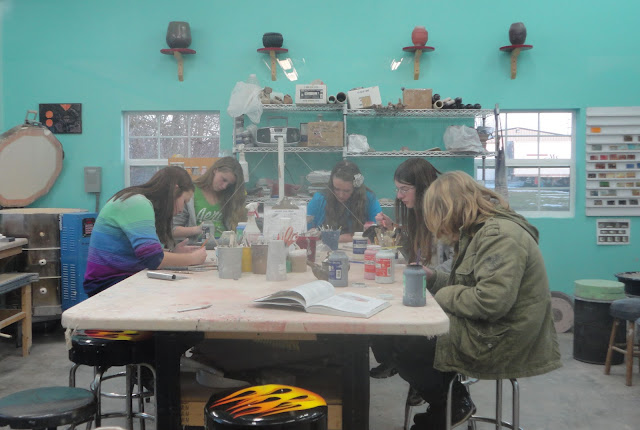 Wednesday was the closing on a house for Sam and family. They are outgrowing their small place and a large house across the street that has been sitting empty for awhile became available.

Mike promised to help Sam two days a week, Tuesdays and Thursdays, before going in to robotics.
Thursday the work began in earnest. 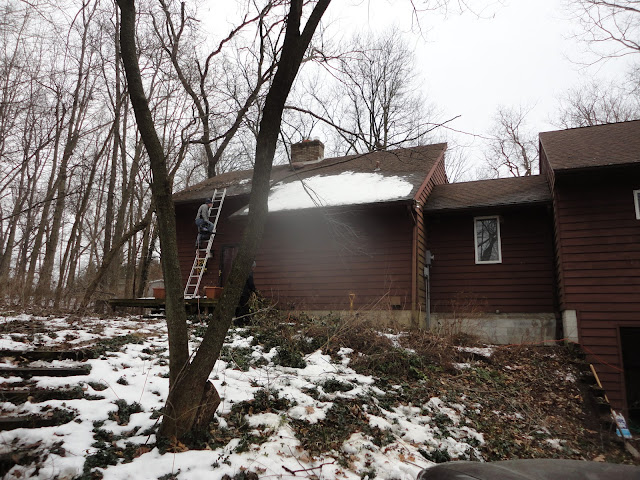 A year ago on that day Sam was helping us move into our rebuilt home!

My week consisted of getting back into the different exercise routines, Bible studies, writing, cleaning, and putting away Christmas decor.
Something I noticed about this photo-journaling year after year is a sameness, a déjà vu all over again!
That may account for the lack of motivation for picture taking. I read on one of the blogs of a weekly prompt and/or photography tip from TLMacdonald Photography. Maybe I'll learn something.
The first assignment was to walk 52 steps from your door and look around for something photo-worthy. This is what I came up with one evening, trying to capture the sinking sun. 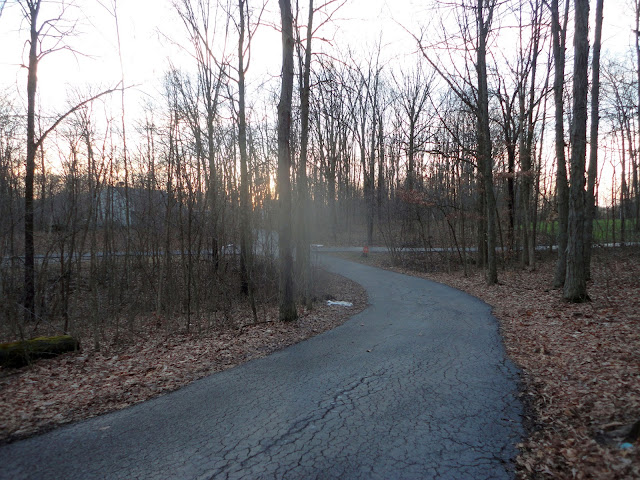 It would probably work for week 2 as well--Leading Lines.
Notice the snow is gone, the weather mild and rainy.

Today friends and family will gather in Wales to remember Jackie.
She left this earth a few days before Christmas to live in her forever home.
The last home on earth was Valentine, a refurbished barge.
Jackie and Chris worked on it for some two years,
then spent two wonderful weeks enjoying their dream boat.

I remember this neighbor and beautiful friend on the M/V Doulos with admiration
for her taste and style, her dignity, wisdom, and devotion to God and family.

As I put away Christmas ornaments I came across a small one
crossstiched by Jackie over 30 years ago. 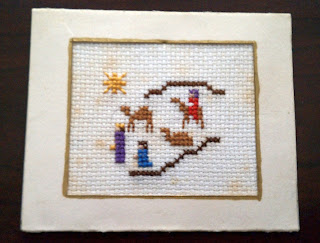 I am so grateful that this little treasured memory survived fire and water!

Jackie, I so look forward to walking with you in Heaven!
Posted by riTa Koch at 9:24 AM 3 comments: Enlaces a esta entrada

Kayla was over Sunday to fill out an application online. Then she decided to go back home and bring back her "baby" to run in the snow.


Monday, the last day of 2012 was quiet and peaceful. We left at 8:30 pm to begin preparations for the Ball drop. Mike and Team 1720 had reprogrammed and improved it and hopefully it would perform as planned.

Unpredictable things happen every time. I was getting nervous as the appointed time was approaching and they guys were still working on the Ball.

However, the 2013 New Year's Eve Ball did light up, rotate, show off multicolor blinking patterns and come down with the accompanying countdown, music and hoopla.

The Star Press did a good job of covering the event in their photo gallery--New Year's Eve. (See if you can find our daughter in the album.) For even more excitement you can view the team's own You Tube video--Muncie Robotics New Year's Eve Ball Drop. 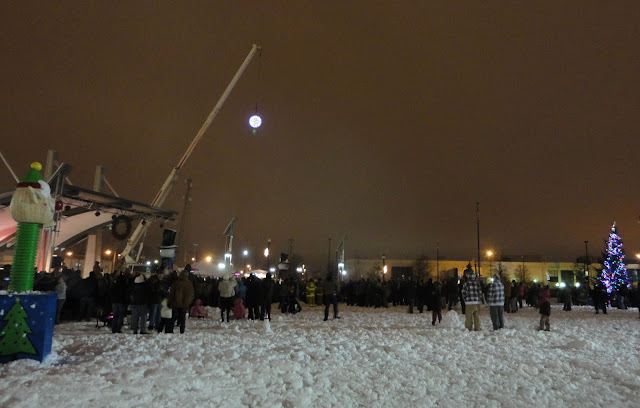 So the year was off to a good start till I went to write in my new journal and discovered that though the cover said 2013, the calendar inside was for 2012. Oops! Whose error was that? Blurb's or mine, when I designed and ordered the weekly planner? Anyway, I spent a great deal of time at the computer this week to replace the misprinted planner, put together the first weekly edition of Missionary Moments for the year, and edit and order Meemaw Moments 2012 from Blog2Print. 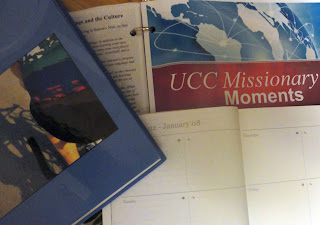 Wednesday we ventured out to the bank. The roads were somewhat better. I tried to capture the beauty of the ice-laden trees and brush, without much success. 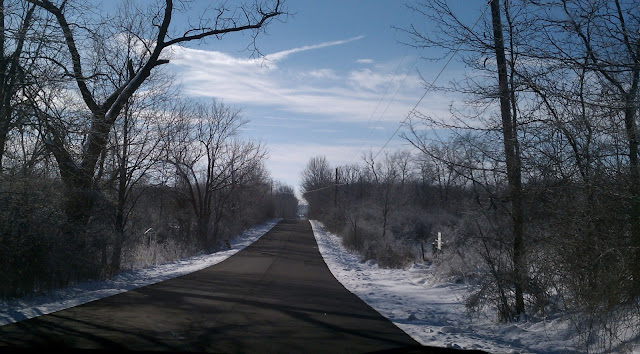 However, I did catch the cardinal pair out the kitchen window. Can you see them? 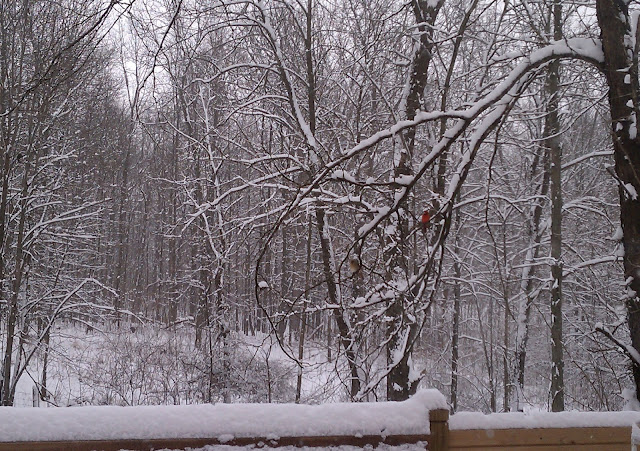 Mike has spent countless hours the last couple weeks assembling and calibrating a 3-D printer for the robotics team to make parts and prototypes. 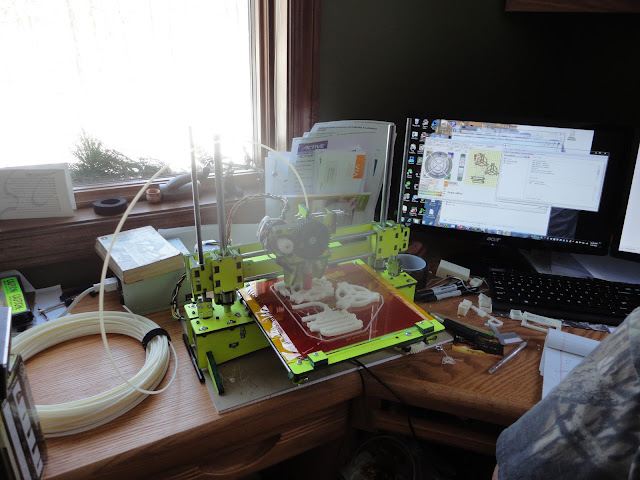 Saturday, January 5, was the Kickoff. The new game, Ultimate Ascent, was revealed and the six-week build-season has begun!  Can you picture robots playing frisbee?  That has Mentor Mike thinking... 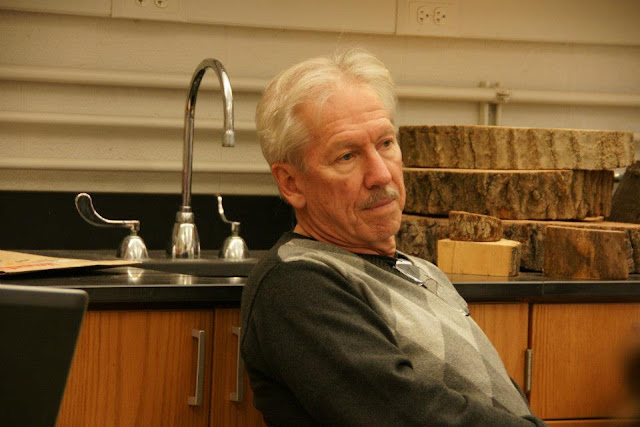 He definitely needs my support and prayer in these weeks of intense focus and much work. And his cough lingers.