I suppose we all question at different times in our lives what our purpose or focus should be. This week I've been asking in what way and where is my little light supposed to shine?  Why do I feel so compelled to write? Is it a futile dream? Will it make any difference?

Sunday was one of the occasional Open House evenings for Pastor Dan's college class, which we've been privileged to join. We had such a good time interacting with a different generation who are asking similar questions for different reasons. They are just starting out desirous of making the right choices. I want to focus on what is really important in this last stage of life and finish well.
Important or not, I had a lot of fun learning how to play euchre.

Monday was the first day of the second semester. Seven students this time.
I sat down and scribbled some goals for myself and for them. I was amused by the similarities and by the fact that I wrote to myself in English and to them in Spanish. 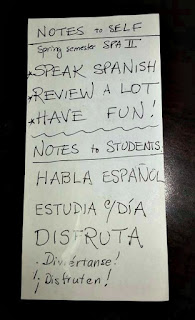 Tuesday as planned I drove up to spend a day with Mother. Hopefully that will become my weekly routine. It happened to be celebration day for January birthdays--a program in the chapel and a dessert in the dining room after. We sat with a newer resident who had met our little family of three (I was a toddler) in New York City on our first attempt to leave for Argentina in December of 1945. 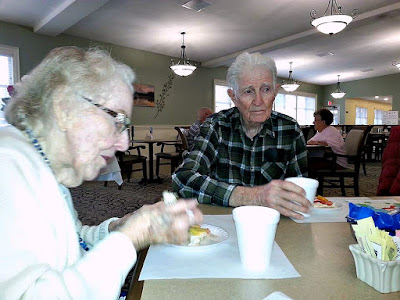 That was only one of the many stories from the past that Mother and I talked about. I discovered several very interesting pieces as I carefully went through my father's files and emptied one of the drawers in the big desk: Dad's sermons carefully typed single spaced with the location and date on the back; a packet of Mother's messages and interesting writings she did not remember; other resources and photos.
In addition, I had brought with me a treasure discovered last week in a random folder: the itinerary from birth to age 72 of my paternal grandmother, the one I hardly knew, and the diary of her last year. I read these to Mother and we counted how many times she moved or traveled from one place to another. We gave up toward the end, after  number 83!

Meanwhile the robotics team is done designing the robot in CAD. Wednesday, after I got back, Michael gave me a short demonstration of how it works. I'm trying to learn more about the whole process, and hopefully be more supportive. 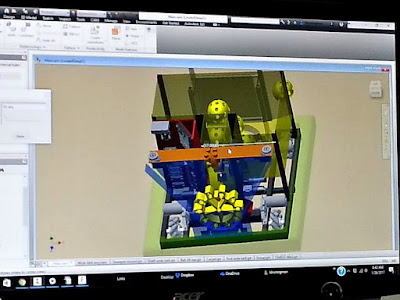 Looks like Michael is not afraid of the machine that threw him off so forcefully a few weeks ago. I watched him from my loft window as he was bringing back the garbage bin Thursday. And he had already been out for a bike ride! 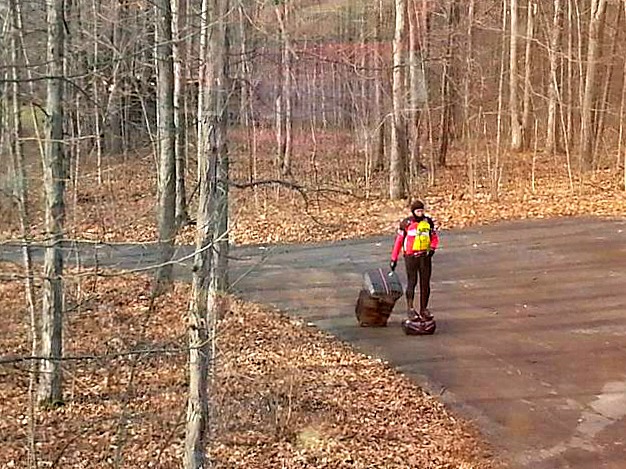 Friday my neighbor-friend had a surprise for me when we met for our usual coffee hour--she introduced me to her first and only grandchild! 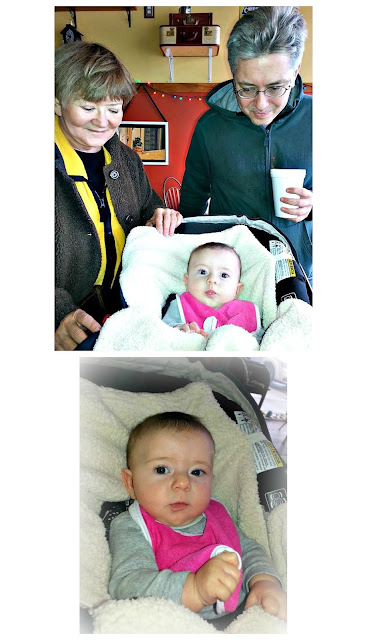 I think little Emmy warmed up to me when I spoke Spanish to her and called her preciosa.

Our own little preciosa is growing up so fast. I loved her photo this week wearing my favorite gray-pink outfit and painted nails.

Saturday was another of those long robotics work-days, something like 14 hours. Thanks to a mentor who takes a lot of photos, I have this glimpse into Mike's day.
I have enough to do around here and stay pretty busy, but it does get lonely. 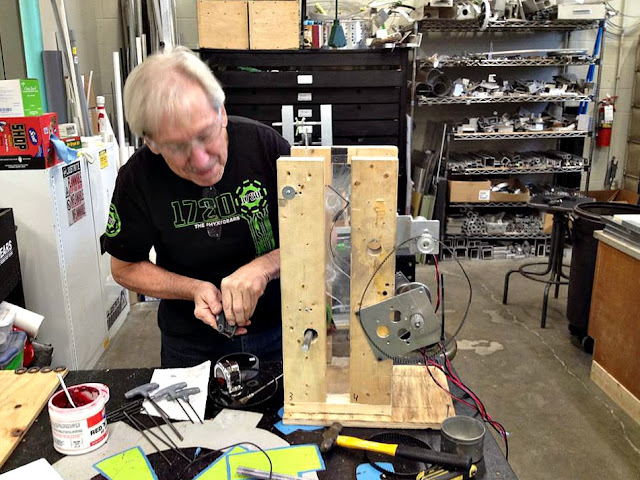 Build season is at the half-point now so they are big-time into actually constructing the real robot as per their design, two robots in fact. They are allowed to hold back certain parts (up to 30 or 35 lbs.) that can be attached to another practice model after the six weeks are up and they have "bagged" the official yet-to-be-named robot.

A week of looking back and looking ahead; considering, remembering and moving forward on this journey called life.

Monday Elijah and I spent his school holiday together celebrating his upcoming birthday (12 on the 27th) with a movie and shopping trip. We saw the new movie Hidden Figures, perfect for Martin Luther King Day! Every time the colored were disrespected, put down, and much worse, we were disgusted and Elijah would say, "Slap him!" When NASA finally did away with distinctions of color, we clapped, and others joined in! 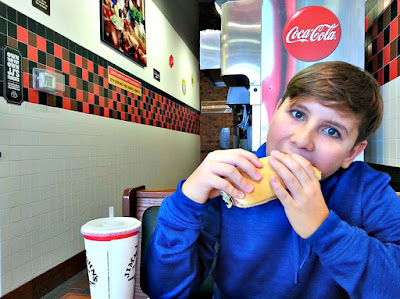 Mother was released from the hospital so the next day, Tuesday, I traveled north for a meeting with an administrator to talk about the possibility of her moving into the Assisted Living area. We went to see an available suite (one bedroom apartment).
Then the brothers started crunching numbers. Financial realities combined with the fact that Mother really does not want to move right now, led us to work on an alternate plan for her safety and well being--meal plan, med alert, and outside help. 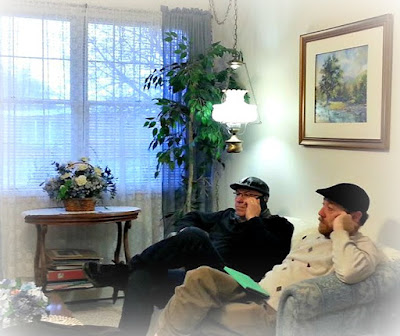 Wednesday at tap class we started practicing a new routine and had a friend practice with us who will hopefully join our team of mature women tappers!

This was the first time I saw our group photo and videos taken of last week's performance.
New York New York 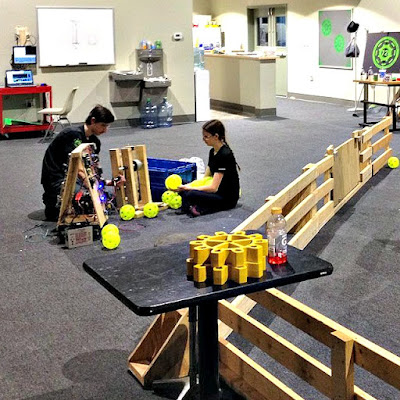 Friday, from the comfort of our home, we joined the millions watching the proceedings  in Washington D.C. Along with our former governor now Vice President Mike Pence, I claim the promise of 2 Chronicles 7:14. 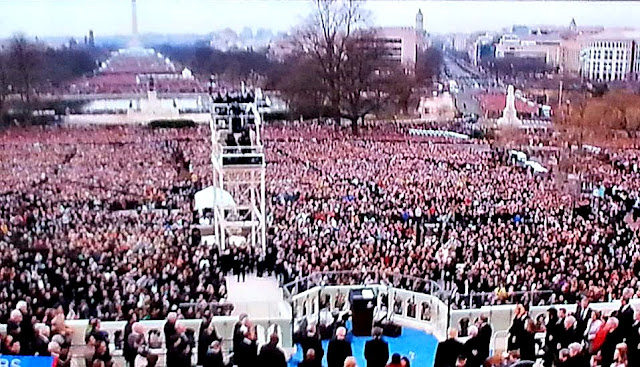 That same day my 2016 Meemaw Moments blook arrived, another good way to look back and reflect on the past year. 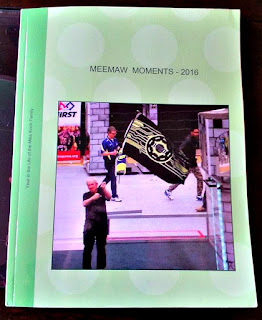 I met Dana virtually some eight years ago through the blogging circle called Project 365. We met in person when she came for a visit a few years back. Before moving further away from Ohio to N Carolina she was able to drive up from Indianapolis Saturday after her niece's national cheer competition the night before.

Thank you, Dana, for your friendship, your faithful and thoughtful comments on my blog, and for making the effort to visit one last time before the move south.

The message of the weekly coloring I completed today, Sunday, seemed very fitting. 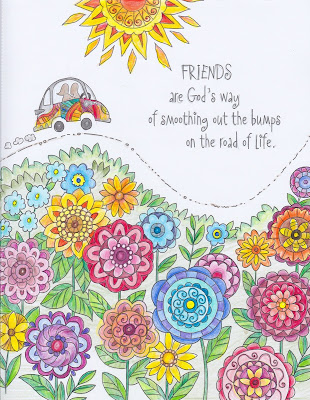 Last weekend, in addition to the exciting FIRST Kickoff, I was thrilled to hear later that our son Sam and many friends were able to give the skateboarding bowl new life. (These are NOT my photos. Thank you Facebook, Seth and Sam for sharing.)
I am intrigued by the Spanish writing, still trying to figure out what the person meant.


The LIFE Bowl montage proves that they were able to have great fun after the hard work! (Again, I don't know who to credit for the video.)

Sam has been passionate about skateboarding ever since I can remember. He posted this old photo yesterday.

All of the above takes on extra special meaning as we've been reminded almost every day this week of what was happening three years ago and how he came through a very serious health crises. We thank God for restoring Sam to our family. 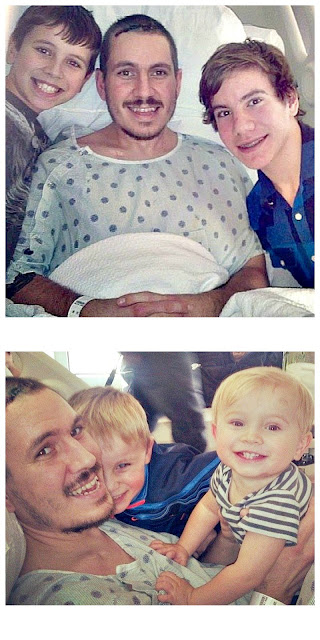 A second article about the PhyXTGears robotics team came out in Sunday's Muncie Star Press.
One of the photos featured the lead mentor doing what he loves. 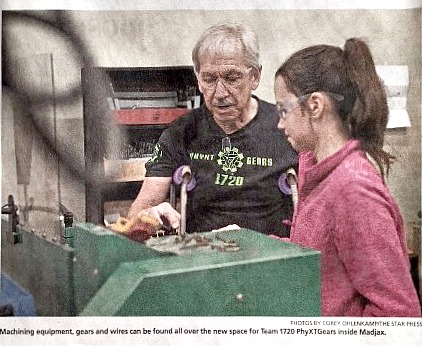 The first week of the 2017 FIRST build season had its serious relational challenges--how to agree on strategies to prioritize and how to achieve them. I believe the worst is over and now the minds are working non-stop on coming up with the best design. They have three team work days--Tuesdays, Thursdays and Saturdays.

Now for some photos of my own!

Tuesday was a good day to travel to Winona Lake. After my last visit a couple weeks ago, Mother fell and has been fighting an infection in her leg. Kim or Ivan had been checking on her daily and changing the dressing on her wound. So I got to visit with them and have some of their wonderful sopa toscana. 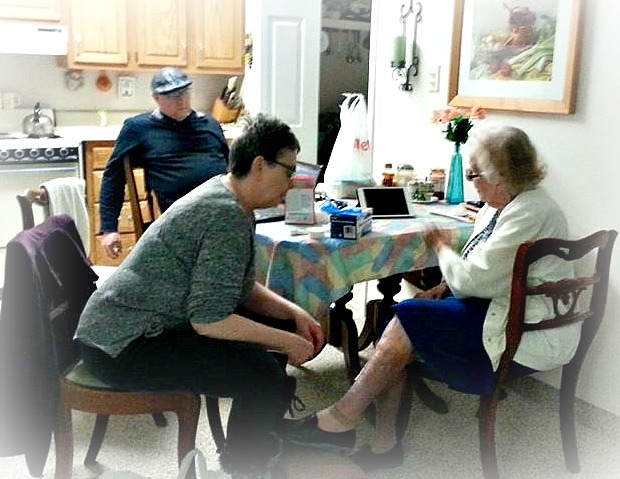 Mother wanted me to help her work on a new door decoration to replace the Christmas wreath.
This is what we put together. 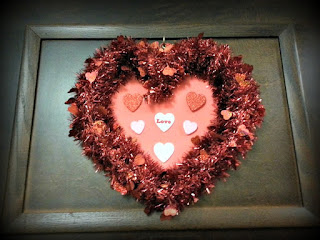 The next day I had to leave after breakfast and be back in time to practice with the Tapping Divas and then perform our two numbers for the weekly lunch crowd at the senior center.
Mike took a few pictures. Not our best performance, but we had fun.

This is my favorite photo of the week: grandson Skye and I worked on a sudoku puzzle while enjoying a Payne's custard dessert, after our post-Christmas shopping trip. 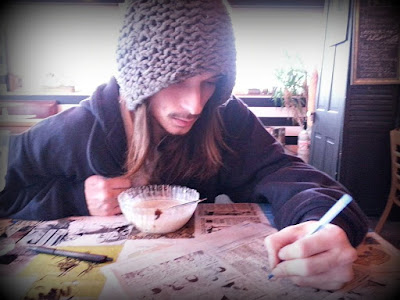 I was excited to see my article in the town newspaper! 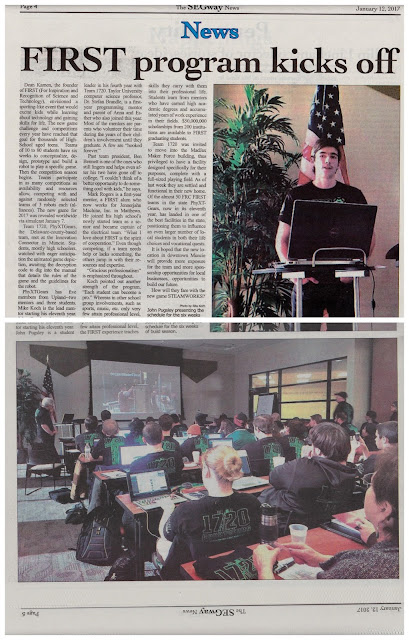 I wrote it last Saturday, after the Kickoff, to make our town aware of the program and introduce the five team members from Upland.

This Saturday, while Mike was gone all day having fun with kids and robot parts, I had the gift of time, so I focused on cleaning house, not my favorite, but I got'r done!

P.S.: About Mother--shortly ofter my visit this week, she ended up in the hospital for observation of the infected leg wound and to regulate potassium and Coumadin levels. She is supposed to be released tomorrow, Monday.

Enjoying a new candle in yet another unique Klaytivity piece. 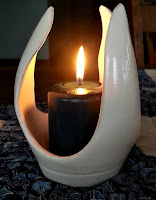 Looking out on a new day and new year, asking questions such as:
--What should I keep on doing?
--What should I change?
These Scriptures come to mind:
--I Thessalonians 4:1c ". . . just as you are doing, that you do so more and more."
and 5:11 "encourage one another and build one another up just as you are doing."
--Hebrews 12 1 ". . . lay aside every weight. . ."
Just when I was ready to give up this blog or give it another direction, a friend wrote, "Keep blogging, Rita!" So, because I have not come up with any better ideas, and this has become a habit, here I am for another year. 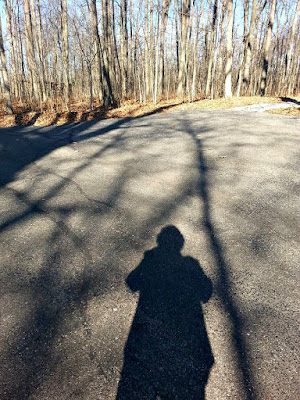 Michael saw the orthopedic specialist Monday and was encouraged to walk normally, let the pain or discomfort be his guide, use the crutches a little longer to keep from doing anything harmful. He no longer uses them.

Even on crutches Michael never failed to feed the birds. 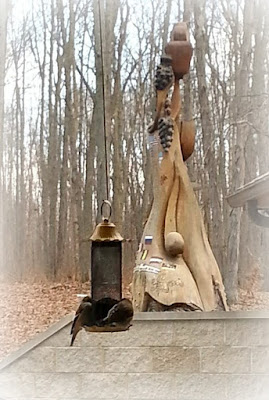 However, unintended intruders cleverly find a way to deplete the bird seed.
Should we be feeding the squirrels as well? Would that even deter them? 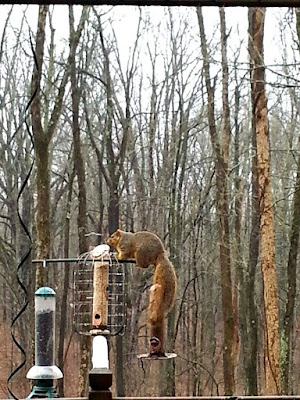 Wednesday three of the students from the robotic's team wanted to come over and play games. Mike put them to work helping with tasks he was not up to yet, like: taking down the Christmas tree and returning it to the attic and carrying in wood and stacking it in the garage. 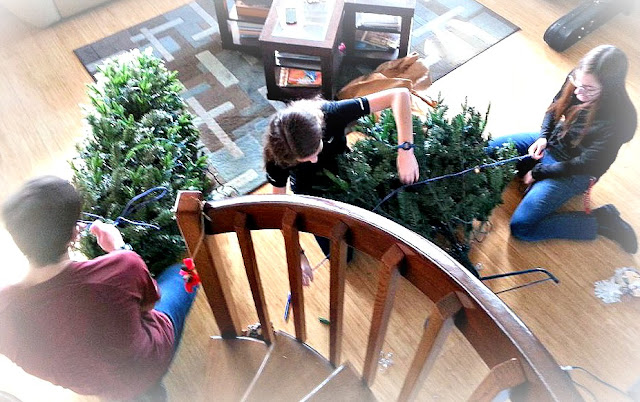 Temperatures dropped significantly. Snow arrived one night and with it the snowbirds. 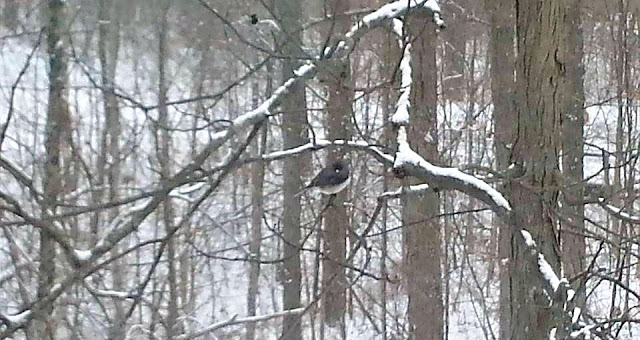 Thursday, the walking-ladies-who-walk-nomore braved the frigid weather to have a birthdays and Christmas-New Year celebration breakfast. We hope to resume our exercise program in the spring. 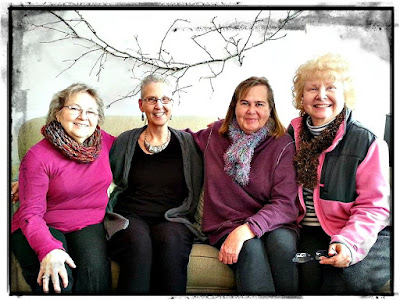 Last Saturday, we welcomed the New Year at the PhyXTGears' new home in the MadJax Maker Force building. 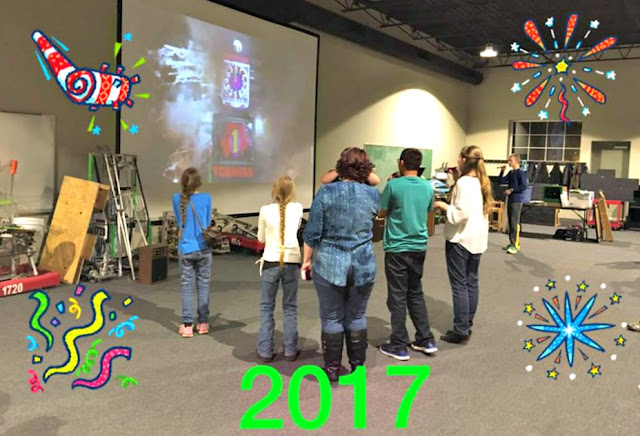 There was still a lot to do this last week before the BIG DAY--Saturday, January 7th, the beginning of robot design and build season! It begins at the Kickoff event where via simulcast the new game is revealed. The 2017 game is STEAMWORKS.

Michael has gone into his "cave" and is almost non-stop designing, researching, creating parts and perfecting them.  I expect him to emerge in six weeks. Meanwhile I will try to keep him fed, and happy ;-)
Posted by riTa Koch at 9:00 PM 1 comment: Enlaces a esta entrada