Sunday after church we were looking around for someone to go out to eat with us. The last person was a very dear lady who would have gone home to eat leftovers all alone--our friend Dane's mother. We had such a delightful time together at the local Mexican restaurant.
On the way home we stopped at the Red Barn to load the kiln with pieces from the pottery classes for adults. The other ceramics teacher had some of her own lovely pieces already in there. 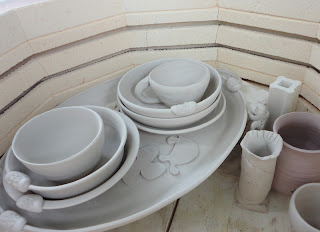 Stephan refinished the fire damaged calendar holder he had made for us a few Christmases back. 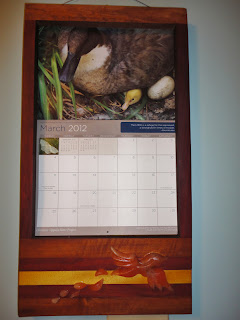 I washed the afghan Karen knit last year and it is as good as new. 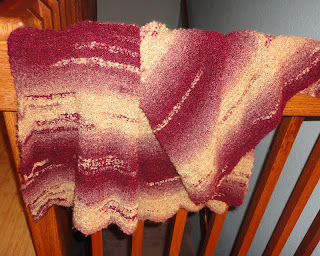 I always have some knitting project to occupy my hands when appropriate while sitting, listening, watching or riding in the car. The latest was very different, using ruffle yarn. Here is the finished scarf which I sent away as a gift. 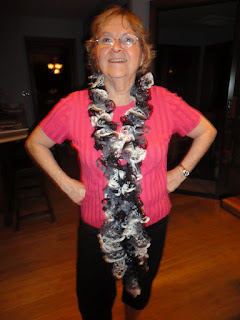 Skye got a new hair color this week, and a lot of attention! 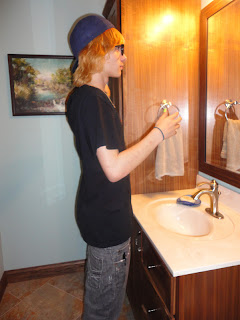 Wednesday afternoon I took father and son to the airport for their first of three flights to Yellowknife, Canada, in the Northwest Territory. It was quite an opportunity and honor for Mike to be invited to help professional ice-carver-son-Stephan in the Long John Jamboree winter festival. I found a photo online from Day 1. Can't wait to see the finished piece.


Mike called Saturday night very tired. It is heavy work, even with power tools in those long hours in the cold! But as Karen says, Stephan "is in his element!"

Meanwhile, here in warm Upland, I have kept so very busy. Several commitments came together at this time, but not without moments of respite--wonderful fellowship with friends.
Thursday I was invited to visit a friend at her bed and breakfast--The Loft Inn. We enjoyed coffee and goodies and three hours of conversation in her lovely upstairs alcove. 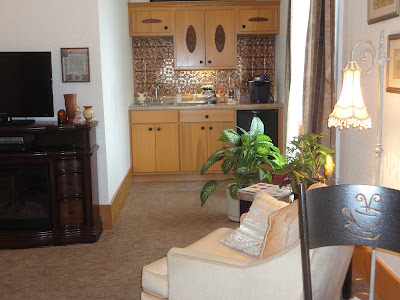 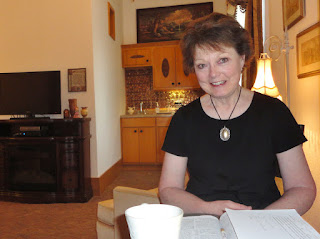 As I was leaving, she pointed out two unique pairs of trees, grown together, inseparable. My comment, "There's a lot of love in this place."


Saturday was my Kenyan friend's book signing. I was amazed at all she has accomplished, and eager to read her story--His Banner Over Me Is Love.

We've had summery weather most of the week, now it is cooling down.

Posted by riTa Koch at 11:23 AM 5 comments: Enlaces a esta entrada

Memories from the Muck

As I come across a variety of rescued and restored items that have come back to us  from the house fire, this title comes to mind repeatedly as a possible blog series. There would be so many stories to tell. A few of them show up in the photos of this week's blog post.

Tuesday was also unforgettable--a trip to Henryville with 35 other volunteers on the LightRider bus to do whatever we were assigned in the tornado damaged area. I have over 100 photos so it is very difficult to choose one. You can go to my album on Facebook to see them all and read the narrative. I was not assigned to the worst areas, so you will not really see the devastation. The guys with chainsaws spent the morning cutting up trees and gathering debris. We saw many loaded trucks go by where we were. 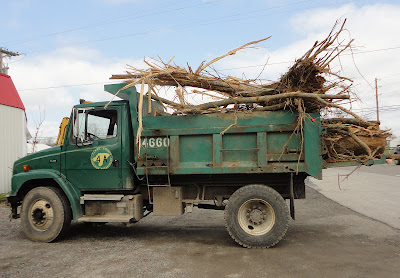 Our group was sorting new donated clothing and food items.
In the afternoon all 36 of us cleaned up an older lady's land and cut down damaged trees.

It's been good to see daughter Leah almost every day and doing so well. Wednesday she gave me a thank you gift. 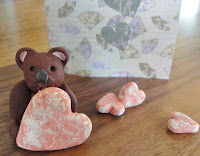 This one is a favorite for two reasons: the artist was a friend who is now in heaven and the stream is in the sierras of Córdoba by the camp I attended when I was growing up.
We haven't had time to hang it up yet. I wanted you to see how well the colors match.

The robotics regional competition was this week. Mike and the team left for Purdue Thursday, a day to unpack Marvin and practice. Friday they competed in qualifying rounds and ended up somewhere in the middle. And Saturday they made it to quarter finals before losing to the overall winning alliance.

Our daffodils exploded overnight! I've never seen so many and all the varieties out at once. Multiply these by ten at least to imagine what our yard looks like. 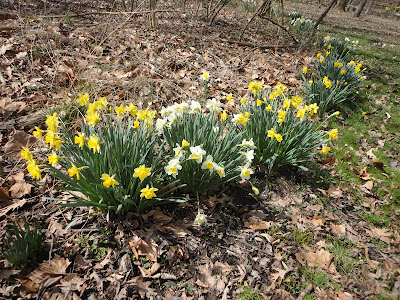 The landscape closer to the house is in a very bad state. Much work awaits.
The weather all week has been so beautiful. I got out and started picking up debris--glass, nails. But I think there must be a better way.
I noticed all the new growth coming up in spite of the mess. What are they all? 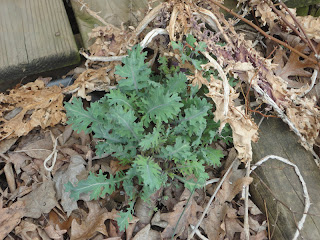 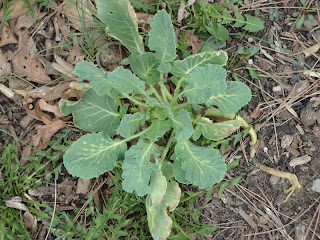 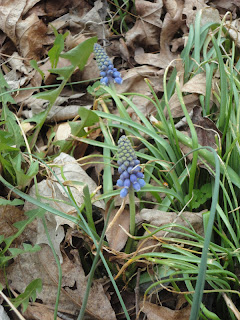 Beauty in many forms


The theme that stood out to me for this week is that of beauty--the beauty of family and friends; sunshine and nature; artistic expression; and the body of Christ.

Sunday we met our friends for dinner at the Potawatomi Inn part-way for both of us. We were on the same team in Germany forty years ago and later in Austria.


Monday, when I took my friend over after Zumba class, to see what was going on in the Pottery room at the Red Barn, there was quite a crowd and a lot going on. Fortunately for Michael, the ones who've been coming regularly know what they are doing and he mainly has to attend to the new ones. 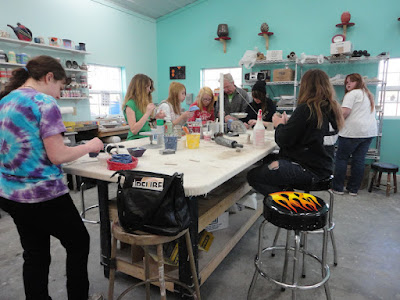 After several days of watching the tornado devastation in Southern Indiana, Mike decided to go help. So, very early Tuesday he took off for Henryville. Later that morning he called and asked me to take his broken chainsaw in to Muncie for repair and wait for it. They had a lot of work lined up but I think because of the urgent need they had it ready in a few hours. Meanwhile I went to Hobby Lobby and fell in love with an item of garden decor. 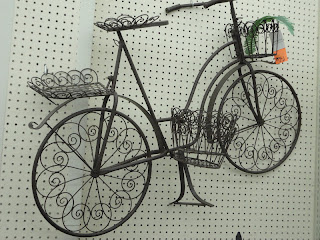 While Mike is clearing debris, I am thinking how to decorate our new home. Quite a contrast.

Wednesday our contractor/friend came by, checking on final details, and I caught this picture out the kitchen window. 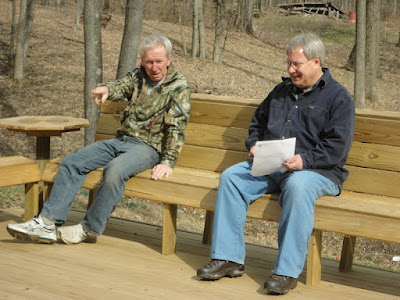 Except for that first day of the week, we have had beautiful sunny weather, though blustery at times.

Thursday, Mike and a few other guys went back to Henryville and it rained all day! They worked hard anyway.
I kept to my home duties and exercise schedule, which now includes water aerobics twice a week. I managed to get this photo as the women were leaving the pool. 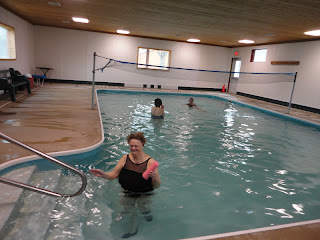 BTW, did you know it was International Woman's Day? I didn't until I saw many greetings sent via Facebook, mainly by my Hispanic friends. They seem to remember and be up on all those celebrations.
Mike got back, soaked and filthy, in time for a shower and an evening with friends. They brought the dessert--yogurt parfaits. 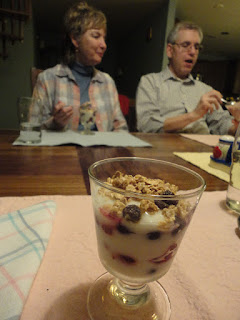 The day wasn't over, however. Sculptor-son Stephan came to help his dad perfect the sculpture he is working on.

Friday I looked out and saw deer grazing, always a lovely sight. 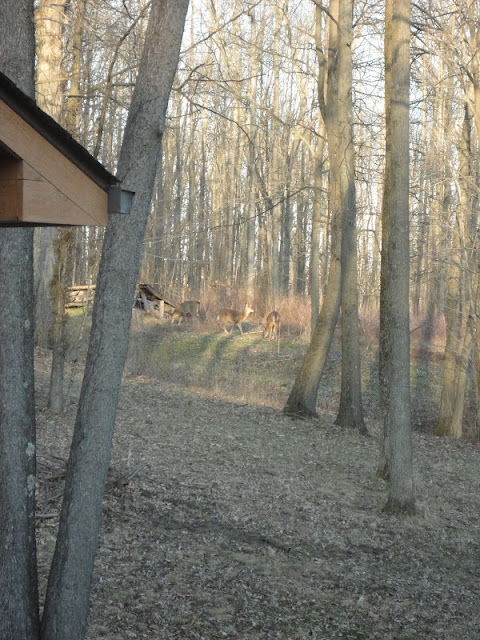 Taylor students came over Saturday afternoon and we had a cookout, first of the season. 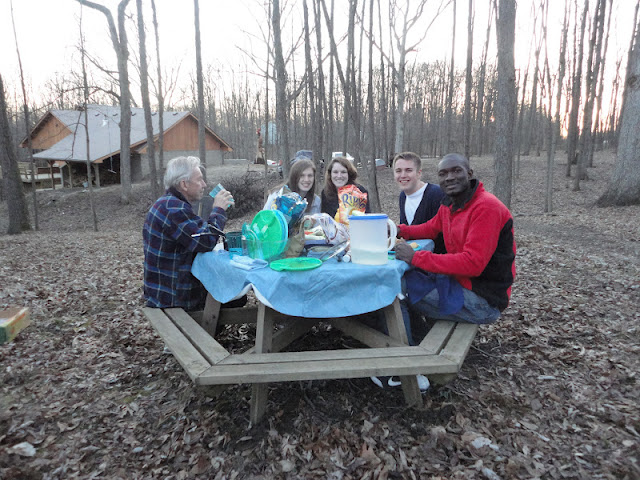 We told them about the picnic there the day after the house fire.

We could not linger, however, as later that evening Kayla had a dance performance in Anderson. It was great to be able to take Leah to enjoy the evening, watch the gala performance, and especially get to chat with Kayla before and after. 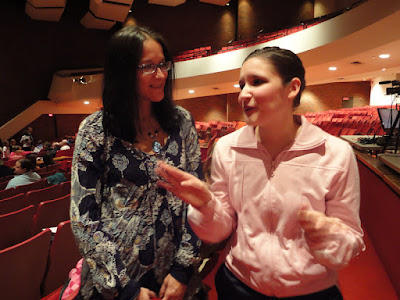 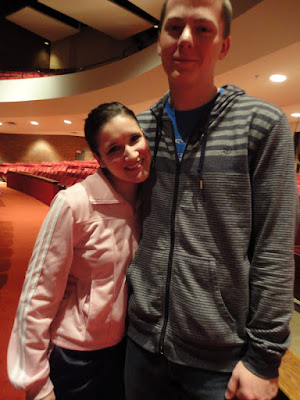 We had looked at coffee tables earlier in the week and later decided which one best fit in with our decor.
I also picked up some decorative plants, albeit artificial. What do you think? 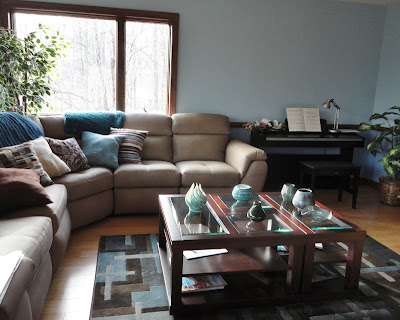 Many hours were spent accompanying daughter Leah as she fought the infection that almost took her life.
We are all so very grateful for the many prayers and the good care she received.
Nurses and family visitors came and went, but "Ivy" never left her side ;)


Skye found a wheel chair to take his mom for a walk, but mostly to sit in and do wheelies.

They are all trying to help Kayla with her math homework.

Later she and I went to a play at the university. It was intense too, based on the life of Maria Callas.


Michael got back from Myrtle Beach golf trip bright and early Monday morning. He had a great time getting to know some neat people and improving his golf game.
On the way to Monday dinner we stopped to check on the second robot.

Marvin is bagged and resting (back left).
Meanwhile, the team is perfecting Banchi, the noisy one, to use for driving practice.
They came by the name Marvin from the little green head resembling Marvin the Martian.

Wednesday Leah was released, exhausted and weak but happy to be out of the hospital.
I brought her to our house. She slept soundly.
In the evening her family came and after a good meal she was ready to go home.

Leah was so happy to see her little Zeus.

Thursday we enjoyed the visit of a few college students we've befriended.
We really want to share our new home and are trying to be very intentional about practicing hospitality.

Friday Michael started teaching an evening pottery class for adults at the Red Barn where they now have five wheels.

I've been helping Leah and family with some meals. This evening, however, Mike and I went to a fundraiser at the school, the typical tenderloin dinner. I ate mine without the bun, and grilled not fried. 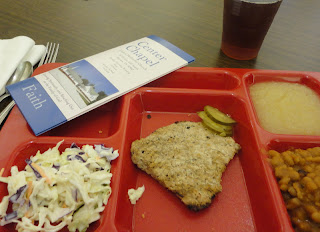 These events are fun because you get to meet so many people from the community.

It's good to be alive!
Posted by riTa Koch at 10:38 PM 5 comments: Enlaces a esta entrada