The Rest of the Story

Day five was rainy and more restful, as much as possible with three young boys: movies; naps; a long walk to the gravel pit where the big boys unwittingly got in trouble trespassing on the sand dunes and then had to write a note of apology to Mr. Himelick; and a Lego building session.

During Bible time we learned of the torn kingdom. Jeroboam got the larger portion, the 10 tribes of Israel. And Rehoboam was left with two. He wanted to go fight, but God said "NO" and this time he listened and stayed home. 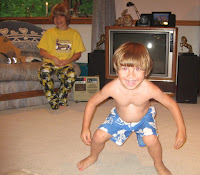 Elijah changed into his swimming trunks every time he heard the word 'camping'. So by evening we began packing in anticipation.

I think the Charles Deam wilderness camping event on Monroe Reservoir will be "Grandpa Camp." So I will sign off. The rest of the experience can best be enjoyed via Snapfish slide show.

We did continue the Jeroboam saga. Sadly, after a good start he became more concerned about his popularity and began to set his own rules--new feast dates and places of worship, priests from any tribe, and worst of all golden calves! God sent a prophet to warn him and even a sign, when the altar split in half. Haughty Jeroboam raised his hand to order his arrest and his arm began to shrivel up! Then he finally cried out for help and healing. Our prayer was that it would not take such drastic divine intervention to get our attention.

Well, Grandma camp is over. Will we do this again? If God wills...and maybe not so long!
Posted by riTa Koch at 9:14 AM No comments: Enlaces a esta entrada

It was Diane's idea to go to the Fort Wayne zoo.
(Diane is Mike's little sister. She is in her 50's, enjoys living in an apartment alone now, appreciates the staff from Carey Services that make it possible. And most days she is OK with with working at the workshop. She writes me an e-mail every week and then calls to make sure I read it.)
Everyone was up early and excited to go. We picked up Matt, Kayla's friend, and set the GPS to take us to Diane's in Marion and then entered the address of the zoo. Off we went following the directions given by a voice we named Cindy.
The zoo was packed, or at least the parking lots. The weather was perfect and sunny. We sort of naturally separated into three groups and met back at the entrance at appointed times, like lunch and for departure. 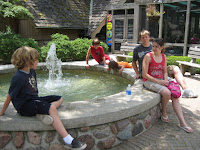 Because I walked with Diane or ran after Elijah, my photos are of them or him with the animals real and fake. 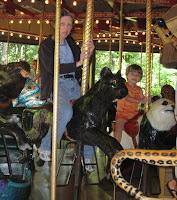 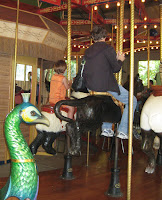 Diane offered to take Elijah on the caroussel and they both enjoyed the ride. 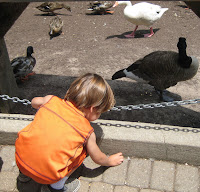 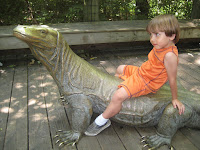 A crock pot meal of green beans, sausage and potatoes welcomed us home.
Grandma was too exhausted to oversee evening activities, so the kids own creative imagination took over. The teams took turns putting on "science shows" outdoors, and later variety shows styled after the talent or dance reality programs that have become so popular these days. 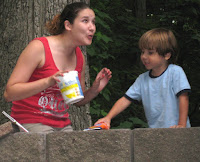 One act was a song and dance dressed like Grandma (when she was young and could fit into those dresses!) 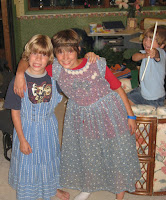 Oh, yes, we did have a pre zoo Bible talk. It was about Jeroboam, a very capable young man That Solomon noticed and chose to lead some of his work crews, but then became suspicious of and tried to kill after God let him know that because of his disobedience the kingdom would be taken from him.
It is already Thursday, day 5, and raining...
Stay tuned for the rest of the story. What does God have for us today?
Posted by riTa Koch at 8:34 AM No comments: Enlaces a esta entrada

Our youngest member was the first one up, even after a bad night--crying for mommy and daddy, wetting the bed and a hard time falling asleep. There was time for a rock in the hammock and even a nap with Grandma before waking the others.

Bacon, eggs and a waffle made everybody happy this morning.

Our Bible reading was about the second time God appeared to Solomon (I Kings 9:1-9) in a dream to give him a strong warning (like OJO in Spanish, "Watch out"): If you are honest and follow Me, Iwill keep my promises and more, but if you turn away from Me and my commands and follow after other gods, then...

So, we talked about choices, and things like 'other gods' that could draw us away, trap us. We mentioned the danger of addictions. Skye said, "It's like we should be addicted to Jesus."

"How could the wisest man on earth go wrong?" asked Malachi.

"Even knowing the right thing to do, he still had to choose," I said.

We talked about the the alliances with foreign nations, the many women from other countries that slowly turned his heart away. He had a "largeness of heart", a very open mind, accepting and tolerant and allowed himself to be led away.

Skye explained about the God-wall illustration at camp and how taking one step at a time toward something that seems no big deal at the time, pretty soon one could have walked away from God. He does not walk away from us. 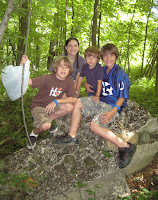 Well, our adventure of the morning was to explore the woods. And sure enough one step at a time we wandered into unfamiliar territory and could no longer recognize the landmarks. We were lost and did not know which way to turn. Finally we came out on a road and realized we had cut clear through to the other side of our block and would have to walk a mile and a half to get back around.

I, Grandma, decided to jog ahead and drive back for the others. Uncle Stephan arrived when I was almost home and came to our rescue.

The other special visitors came all the way from Denver, Colo 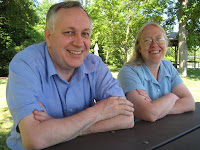 rado--my brother Aldo and wife Alice. We had a great visit while Elijah napped and the big boys played at Taylor Lake.

Then we all went to Ivanhoe's. Oh, and Aunt Karen and Grandpa joined us too. 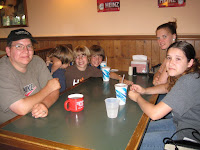 So another good day is over.

Tomorrow we go to the Fort Wayne zoo. A big day, we need our sleep. Good night. 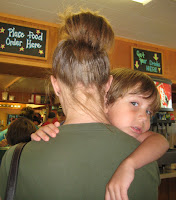 Posted by riTa Koch at 9:54 PM No comments: Enlaces a esta entrada