The week began having fun with the grandsons and now I'm sitting with my daughter in the hospital.
Meanwhile Mike has been gone most of the week, first finishing up the robot and now on a golf trip.
So, here are the daily photos and stories.

Sunday
The last Sunday of build-season Team 1720 hosts other area robotic teams for a scrimmage to work out the kinks in the robots. Thirteen teams practiced playing the new game. IPR did a great interview [http://bsu.edu/ipr/news/local-students-create-basketball-playing-robots-for-state-competition] worth listening to, only 1'42". My favorite phrase: "It looks like we're building robots, but really we're building people."

Meanwhile back at the homestead, the grandsons came in the afternoon and stayed overnight--first time in the new house.
The older ones and I went for a walk in the woods. Fun!

Monday
Sweet sibling moment. They're not all like that. 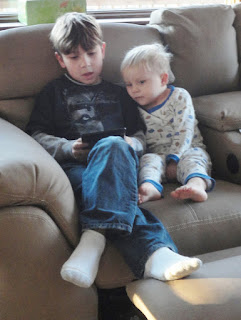 Tuesday
Mike did not get back from robotics till 2 a.m., and was gone again in the afternoon. This was the big day, the famous deadline. It used to be called Ship Day. FedEx would store the crated robots and ship them to whatever regional competition at the appointed time. They no longer offer those services, so teams are required to bag and seal their machines by midnight. That is why it is now called Bag and Tag night.

I was told but cannot remember the story behind the name Marvin.
This year, for the first time, the team built two robots so they have one to practice with until the regional competition in March, which could make a huge difference in their performance.

Wednesday
In the afternoon Mike left for Myrtle Beach on the LightRider bus with a group of eighteen men. Before he began mentoring the robotics team, he had gone on the annual golf trip several times. But the last six or seven years he has not been able to go. This year, however, they moved the trip dates around to make it possible. Also, his golf clubs were saved from the fire because, for some odd reason, they were in the trunk of the car that was out of the garage at the time.

Months later we are still finding tags on restored items and clothing. 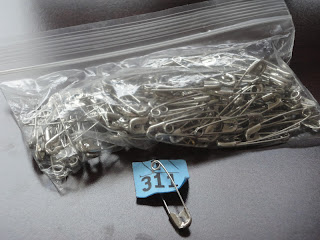 Thursday
I went to Grace Village in Winona Lake to visit my parents, arriving around dinner time so I got to help feed Dad and attend the weekly Bible study on the Health Care side. The lesson was from Matthew 6:25-34--Don't worry about your basic needs. Seek God first and all these things will be taken care of.
Dad's head is always down now and his eyes closed most of the time. It is a rare treat when he opens his eyes, turns his head, and smiles. 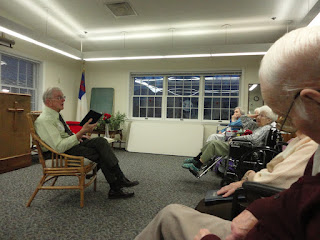 Mother and I went to her cute little apartment and ate a late supper and I stayed overnight.

Friday
We hung out together all morning and ate a nice dinner in the dining room then went our separate ways. Mother scooted off in her autito, as I call it, and I headed back home. 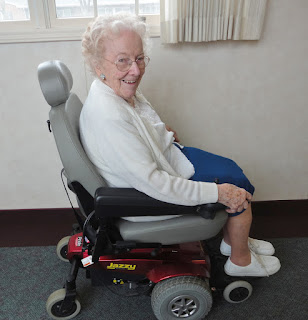 I stopped to see Leah on the way. She had been sick all week and we were concerned. They did go to the ER that night and she was admitted to the hospital with a serious kidney infection.

Saturday
I spend much of the day at the hospital enjoying being of some help to my daughter. She remains cheerful and funny even through pain and exhaustion. The doctors and nurses were amazed. I joked about getting a more believable photo where she wasn't smiling. 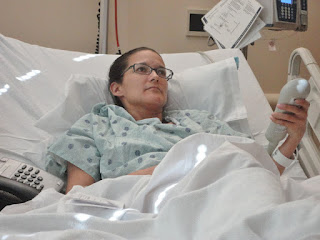 More family members arrived and we enjoyed being together. We are all so very grateful that Leah is finally getting some medical attention and care. She is one who does NOT go to doctors. I think this was a wake-up call. 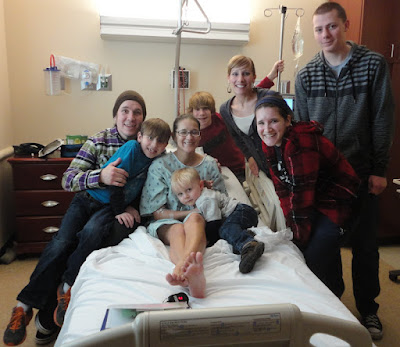 Tomorrow it is my turn to teach Junior Church 2nd and 3rd graders. The lesson is that we will go through hard times, but God has promised to be with us.
Posted by riTa Koch at 10:00 PM 6 comments: Enlaces a esta entrada

A little bit of everything

Sunday we waved goodbye to Sara and Jared as they headed back home to Arkansas. 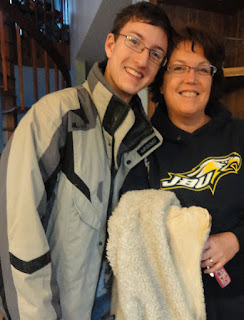 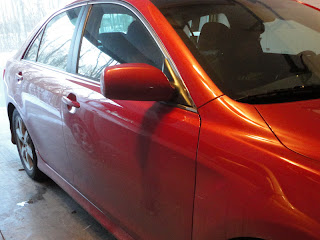 Sweet memories remain and a very meaningful gift sits on the window sill which represents our desire for the 'new' house--to practice hospitality. Mi casa es su casa, is our motto. 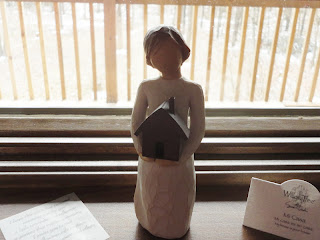 Monday
Mike hasn't been to Monday meal at Stephan's since robot build-season began in January. He goes directly to robotics after the Red Barn. 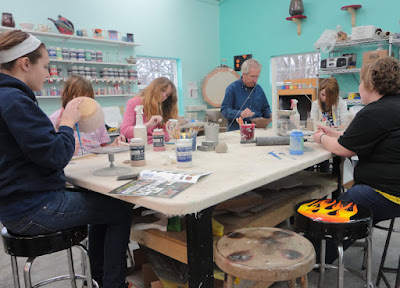 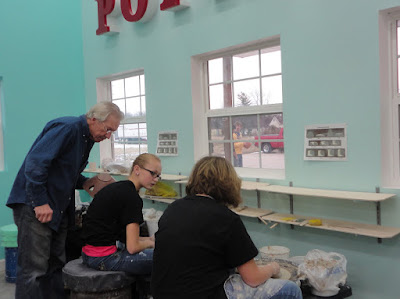 I went to Monday night meal and got to hear about the winning "Flying Heron" (# 1 out of 20 ice sculptures at the professional competition in St. Joseph, MI)... 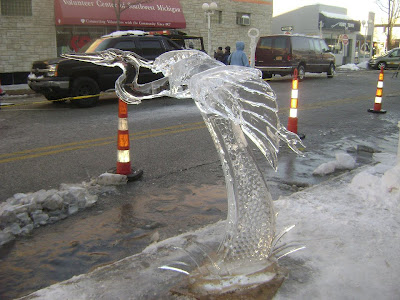 ...and see the impressive trophy. 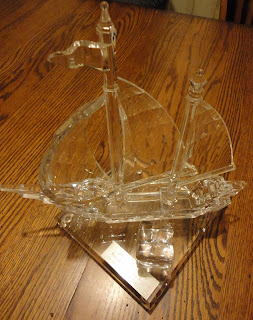 Wednesday
Can you guess where I am? 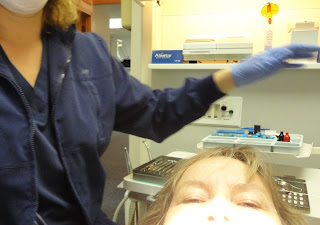 Yes, I chipped a tooth last week and had to have it repaired.

In Thursday's photo, you see the where, but what was I doing there?

You guessed wrong. I wasn't checking out books, I went to a poetry reading.
My contribution was I Love Ruthie, by Phil A. Smouse.
And, yes, I photographed yet another county Garfield statue to add to my collection.

Friday
My neighbor/friend, Glenda, and I joined a group of women that are experienced scrapbookers for an overnight at Wandering Wheels. It went from 3pm to 11am the next day. We had so much fun learning from the creative ideas of others, and playing with their toys (scrapbooking tools). You can tell a true 'scrapper' by the mountain of luggage. When I arrived with only one load, they wondered whether I'd come to the right place.
My project was to reassemble, in some attractive fashion, the series of saved photos that tell the story of the original house that Mike built. 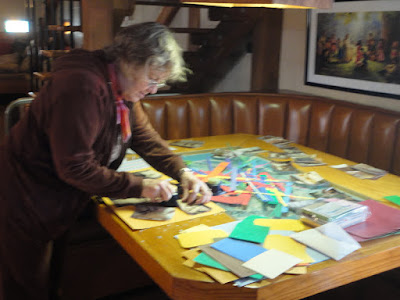 We chose our bunk or sleeping spot and finally all was quiet sometime after midnight. 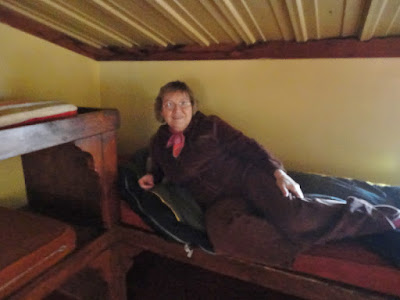 Saturday
The ladies who sponsored the event, as a fundraiser for the Serenity House, were up early cooking breakfast for us.

Michael also 'overnighted' but with no sleep and not nearly as much fun. As the deadline for shipping the robot draws near, hours are extended. The FIRST program aims to replicate the life of an engineer--resolve a problem in a given time frame with available resources and set guidelines. You thought only doctors have strange schedules?

The grand finale to our week was being able to attend the Marion Philharmonic Orchestra's concert held at Taylor University. (Mike did get back just in time to attend, and didn't fall asleep during the program!) And, the cherry on top, or two cherries--we were given three complimentary tickets at the last minute and our DIL came with us! (Stephan is competing in Wyoming this weekend.) There was a third cherry--Karen invited herself to dinner with me before the event!
Posted by riTa Koch at 1:02 PM 7 comments: Enlaces a esta entrada

The week's highlight was the visit of blog-friend Sara and son Jared all the way from Arkansas, our first face-to-face meeting!
More about that later. Let's rewind to last weekend--Super Bowl Sunday.
Indianapolis saw thousands (hundreds of thousands?) of visitors for this exciting event. We enjoyed watching with friends at their house, and all rejoiced in another Manning win. Can you believe I have no photo to show for it?

Monday I started back to Zumba, now that we are more settled after an entire month in our new house. 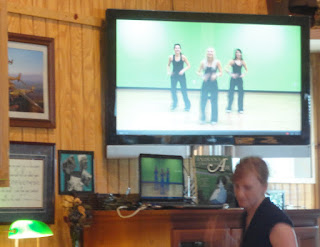 Tuesday, a wonderful surprise for me--a piano! It is perfect in every way. So far I have enjoyed playing some every day. 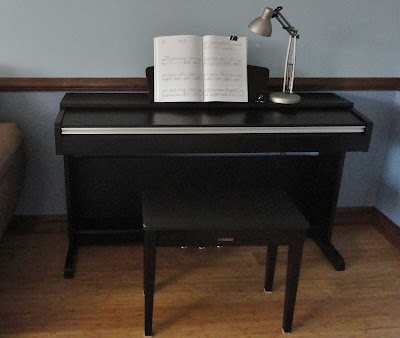 It was fun to see the guest beds come together.

The theme of this room represents the five years of our life on board a missionary ship, the M/V Doulos.
I hope Sara doesn't feel sea sick.

I've already hung a map of Argentina and gathered some of the memorabilia, but there is much more to be done.
The click 'n clack sofa doubles for a cute bed. The colorful bedspread has a neat story. People all over the world prayed for us when they heard about our house fire. My cousin shared with her church in Tennessee and an elderly lady asked if she could give us a quilt.

Sara and Jared traveled eleven hours on Thursday and when we met it was like we already knew one another like old-time friends. 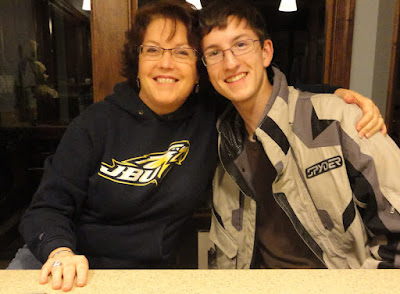 Friday they were busy with two university visits: Anderson, primarily, and also nearby Taylor. 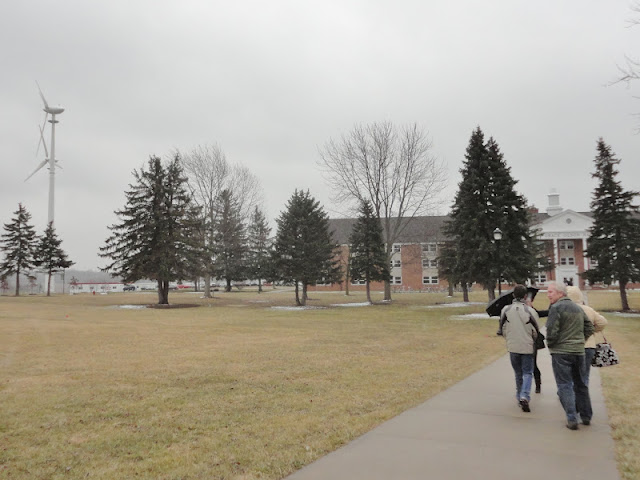 Mike and I went along for the latter. We were all so impressed with our tour guides. Here we are fighting the cold wind. The twin wind turbines were named, in jest, Mary Kate and Ashley due to their proximity to Olson Hall.

We had a memorable time chatting, sharing, cracking nuts, scattering shells all over the kitchen, laughing.


In the evening we attended an excellent theater performance of "Proof".

That brings us to today, Saturday, big day for Jared--his audition for the music department at AU. I don't know who was more nervous, mother or son. He did very well!

And even made room for shakes and a sundae!
Posted by riTa Koch at 9:35 PM 11 comments: Enlaces a esta entrada

Celebration Sunday
For several years now as a church family we all go to the university dining commons for dinner. It is the weekend between January term and spring semester so the students are gone. While enjoying this time with friends, I try to remember to have someone take our annual photo as it falls on or near our anniversary. 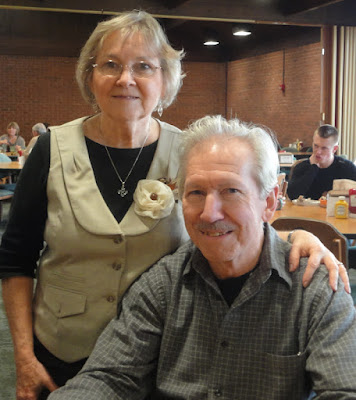 The actual day, Tuesday the 31st, started with a special breakfast, but life went on pretty much as usual with the added glow of gratefulness for our forty two years together by God's grace.


Later Leah brought over some of her wonderful baked goodies. 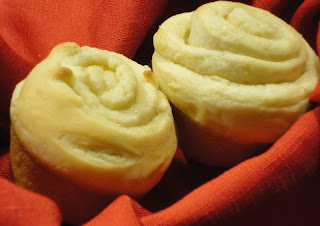 I talked to Mother and learned the story of the table and chairs. 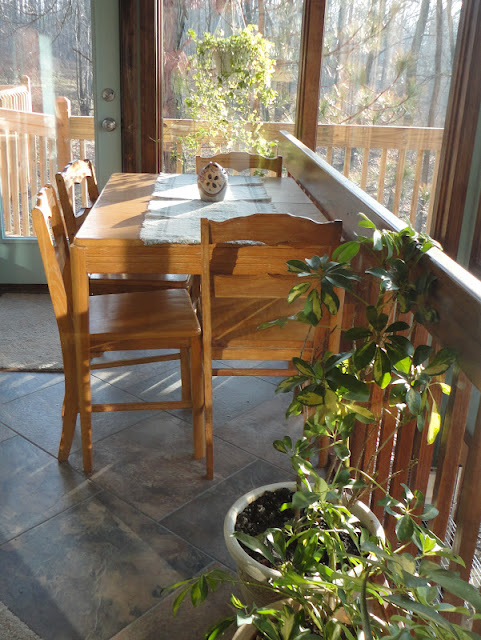 Grandpa Hirschy bought the set for Mother and Dad when they were married. Those early years, while they were students, they divided their time between Winona Lake and Huntington where Dad pastored a small church. During the summer they lived in an apartment next to the meeting hall over a bridge and through the school year they stayed in Winona on Chestnut St. and spent all day Sunday in Huntington. The table went back and forth with each major move. Then when we left for Argentina (I had joined the family by then) grandpa and grandma kept the dining set for them. Many years later, after the grandparents were long gone, Aunt Joyce took over the Hirschy home. My parents had come back to the USA to stay, so she returned the table and chairs to them.

Progress report: Mike put up the mural in the "Ship Room"; installed blinds and ordered more; put together a TV stand, and much more. The painter came back in the nice weather to finish a couple paint jobs.
The front door frame is no longer a striking white so I decided to take pictures. And the sun was shining. 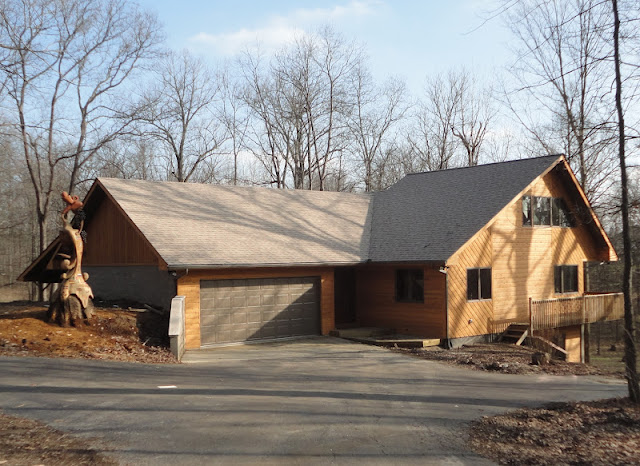 All week the weather has been very mild, sometimes sunny and spring like.
At the beginning, I see from this Sunday photo, there was leftover snow.
Momentary sleet and small hail one day.
Sun most of the time and some spotty rain.
This morning a snow coating that quickly disappeared.
Punxsatawney Phil says, "Six more weeks of winter." "What kind of winter?' I ask. 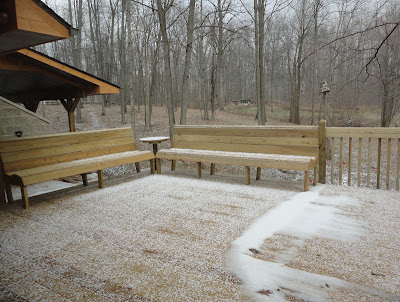 And today, Saturday, the 4th, is daughter Leah's birthday. We're off to celebrate. Be back later with a photo or two. Hasta luego...

Home again. We met at a restaurant in her town and had a great time. The lighting was not good and the only good photo does not show Leah's liveliness. All those shots are blurry, I wonder why! 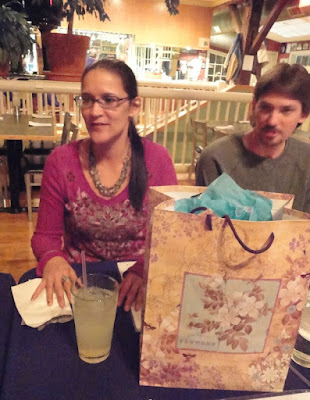