This has been a very quiet day, so not the norm.
The rest of the week was one of goings and comings.

Sunday we traveled to Grace Village in Winona Lake to celebrate Mother's 91st,  belatedly. Her birthday was July 29th, but we waited till one brother from South Carolina arrived for a visit.
I took two coconut cream pies, nine candles on one and a lone velita on the other. 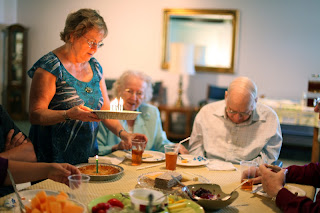 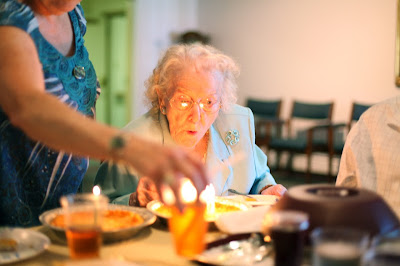 My brother Lynn had spent a couple days there already so came back with us for a few days.

Mike had a dream that night that family members should sing and record music familiar to Dad so he could fill an MP3 player and try out an idea he came across where elderly folk, seemingly lost to the world, come alive and begin to respond when they listen with special earphones to familiar tunes.  So, Lynn and I decided to find a few good songs to sing and play.
Also on Monday he and I got started sharing our ideas about a memoir of growing up in Argentina.
We did pause for lunch. The only photo I have for the day is of the last piece of pizza, one of Pioneer Woman's favorites. I tried to use up some egg plant I had from Victory Acres' share. 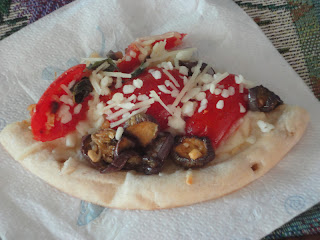 The guys had more good food that evening at Steph and Karen's but I had to go to a board meeting.

Tuesday Mike was up very early, couldn't sleep, and no more dreams either.  I went looking for him and found him in the garage assembling a plane for the children's ministry float in our town Labor Day parade.
I got a photo of him being silly. The finished model was pretty cool but he delivered it to the church before I could get a picture. 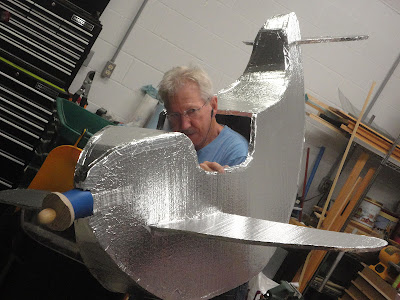 Lynn got on a roll writing down his memories of life in Argentina. He had 14 pages worth by the time he left. If all five siblings did this, the result could be very interesting and varied. We are so spread out that each lived a different phase or place. We chose some songs and practiced some each day. Wednesday we recorded what we had, such as it was. 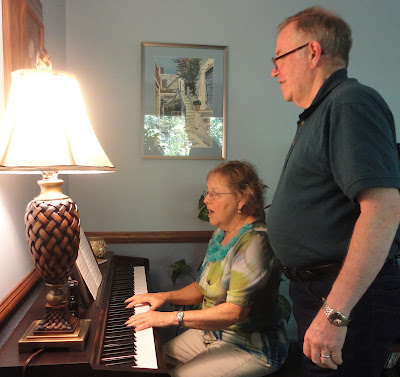 After lunch, Lynn and I headed up north again for another celebration--Mother and Dad's 70th anniversary.

It was a fun evening. We were blessed to have nephew and niece, Jon & Tina, and their spouses with us. (They belong to Ivan and Kim, Just a Southern Girl.) We don't get to see them very often.

I spent that night in the guest room next door to Mother's apartment.

Thursday I took Lynn to the airport in Fort Wayne on my way home.

When I watered the garden I noticed the come back of some lovely flowers that I had to replant in the deepest shade. In their first location the blooms and leaves had burned. I don't even know their name. 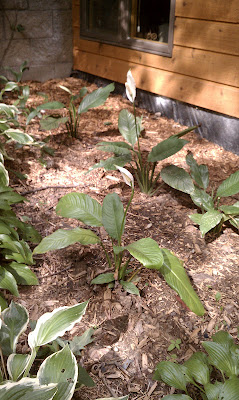 This is welcome weekend for Taylor students. Chaplain Randy had the annual bike ride for his chapel coordinators on Friday and Mike was invited to go along as bicycle expert and mechanic. I get to tag along on the tandem. We really enjoy these young people.

Today, Saturday, a new Taylor student and her mother stopped by to meet us, friends of Sara, our Project 365 hostess. Here she is admiring one of Mike's sculptures. Almost looks like her! 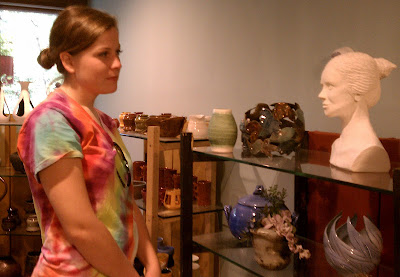 They could not linger, but I'm sure we will be seeing a lot more of them in the coming years.

I had a very productive morning attempting to preserve the bountiful seasonal produce. 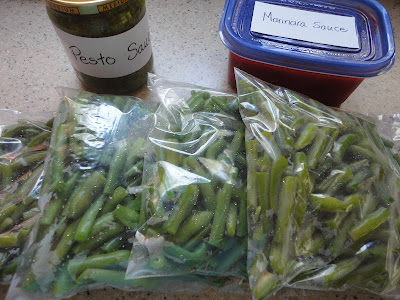 We are having more fun than anyone should be allowed!

Sunday, Gina invited all of us like-family friends for lunch.


Just realized that it's been a year since Kayla got her car and started college. Monday she goes back again.

Friends from Doulos days arrived Monday evening and joined us at Stephan and Karen's for Monday meal. Forgot to get any photos.

Tuesday we took them to the Indiana State Fair along with SIL Diane. Perfect weather and great prices on $2 Tuesday. The highlight for me was the Sandi Patty concert. 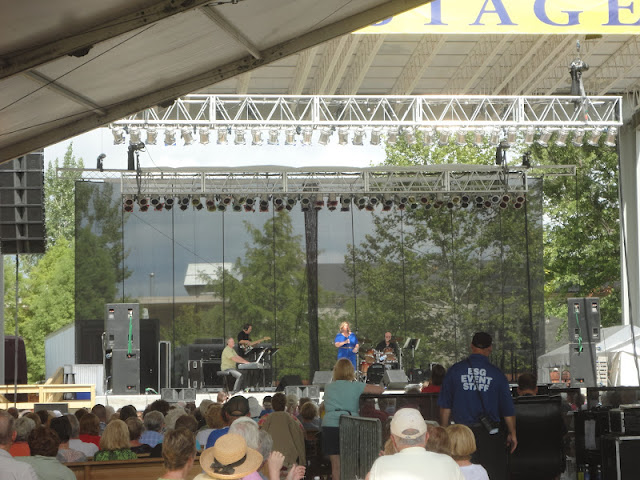 Wednesday we took our friends to Muncie to the world headquarters of the Academy of Model Areonautics. Long lines of tents, booths, flags, and model helicopters! And in the Museum we found Mike's name on one of the several walls covered with thousands of names of those who are or have been members. As an adolescent he built and designed remote control airplanes.

Bought this gigantic tomato at the Minnetrista Farmer's Market, especially for the seeds.

Thursday our friends left after breakfast. We had such a good time together.

Friday, Leah joined me at the Upland Farmer's Market to sell some of her unique cards.

Great week, lots of fun, and now it's time to go to bed and be ready for another full week.
Posted by riTa Koch at 11:59 PM 4 comments: Enlaces a esta entrada

Do you know your state emblems?
Recently we had a quiz and I was made aware of the Indiana state motto, Crossroads of America. This month will prove it true as we welcome visitors coming through almost every week. 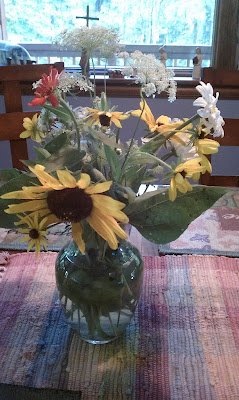 I so enjoy the fresh flowers we get to pick at the community farm.

Sunday was Karen's birthday, but we didn't celebrate till Monday night meal. I made her favorite--peach pie. 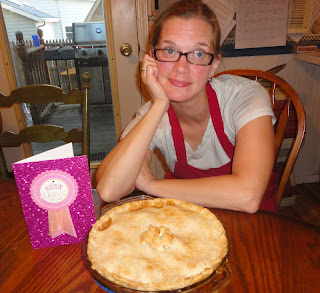 Tuesday evening we had a dear family over for dinner and fun. They are a family of artists. 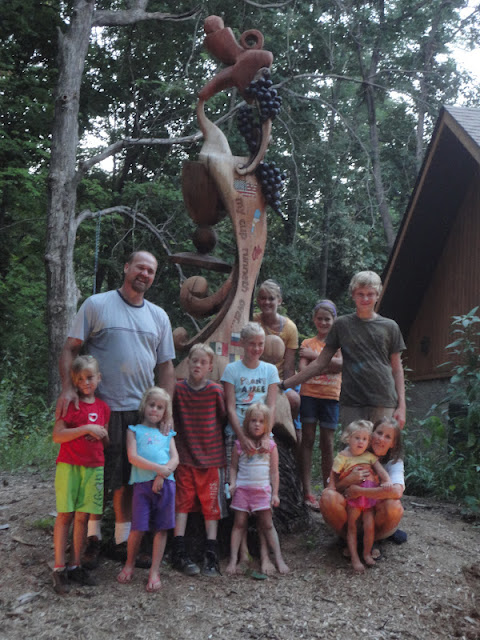 So, where's the mom?


Michael, my very own resident artist, had a very sad thing happen to one of his prized pieces.Ready at last to be bisque fired, it suffered a fall in the kiln and the lovely dancer broke off of her pedestal, lost a leg and a few fingers. I think she is still beautiful. Venus de Milo lost a few limbs as well.

Thursday we prepared for overnight guests from New Mexico. Nocha and I met in college and our paths crossed many times as we both served with Operation Mobilization. Our last stint together in the same community was on the ship Doulos where she met Dallas.

I had never heard of music Fake Books and was very impressed with the results of this method of learning to play the piano when I heard seven-year old Trinity play after only four lessons this summer.


Friday evening, after a long day of many errands for me and golfing for Mike, we decided to stroll the festival in a neighboring town and eat fair food. It was unusually windy and cool so we did not linger. We did, however, stop in to visit the youth center they are working on, a vision patterned after the mission of the Red Barn in our town. 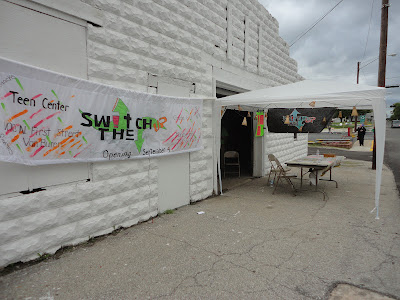 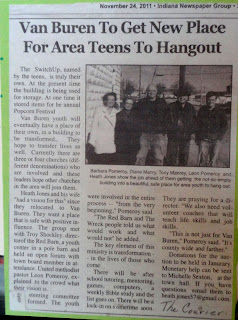 I went back Saturday morning for the Kernel Klassic, their popular 5K race and fortunately the weather was very pleasant.

Mike was riding as usual with his cycling club, only four today. They stopped by here to see the house as it was on their route, but were gone before I could get a photo.

Well, these are snippets and snapshots of our week.
Posted by riTa Koch at 8:46 PM 9 comments: Enlaces a esta entrada

Fun with family and friends

Sunday we met twice with a dear missionary family returning to SE Asia soon. They asked Stephan to cater the evening event for their supporters and friends. Fun to see good friends who long ago moved away.

Sorry neither shot shows the delectable array of foods he prepared.

Our friends stopped by after to see our new house. Leo helped build the first house. They used to live down the road. We will never forget how on Saturday mornings he would walk over and help with whatever was going on at the time. Thanks, Leo!

Monday at the meal, Stephan showed me what  he found growing on one cob--huitlacoche, the Mexican more sophisticated name for the fungus commonly called corn smut. 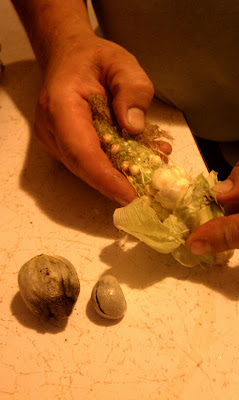 Does it gross you out, or would you eat it as a delicacy in your tortilla?

Tuesday I captured this view of Mike watching the Olympics on two different screens. I looked in from the deck where I was reading. He has been engrossed in the games from the start. 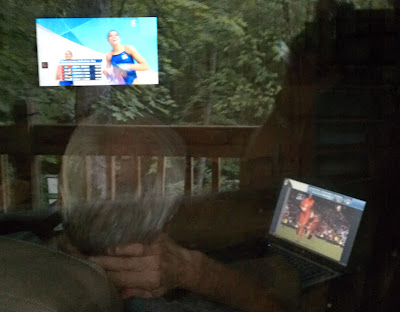 Wednesday--a trip to Marion to take grandson Skye on a birthday shopping trip and SIL Diane out to lunch to Aunt Sue's Tea Room. 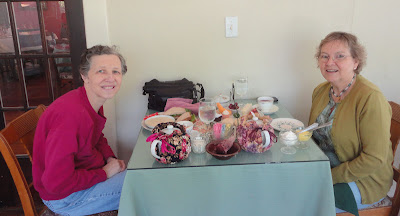 Very appropriate, indeed, to have tea (typical English meal) during this British Olympics. 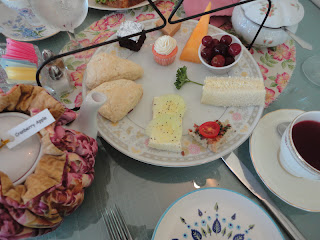 Thursday morning started out with an 18 mile ride to McDonald's in Hartford City with Captain Mike. 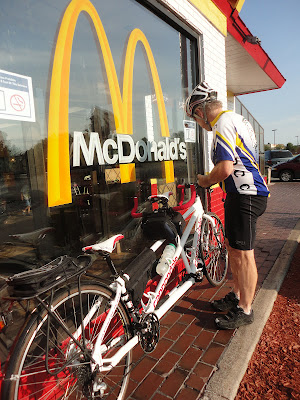 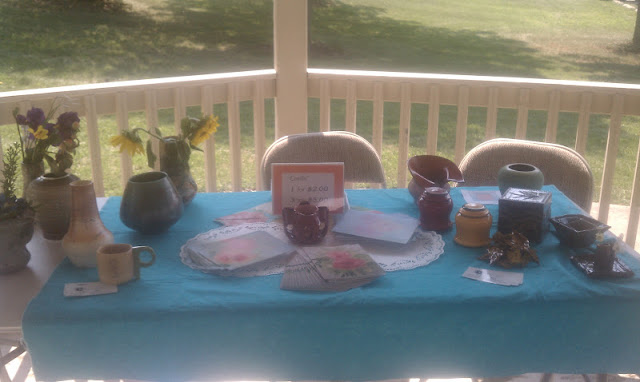 The original idea was to include artisans. I sold a few of my note cards, but none of Mike's pottery.
I enjoyed seeing people and talking to the other vendors, and spent a lot more than I made.

The youngest two grandsons stayed overnight and kept things hopping. Zion at two and a half is already very aware of Grandma's need to take pictures. He often brings the camera and insists on posing but never stays still long enough, ha!

Saturday was a very busy day preparing to celebrate Skye's 15th birthday (July 29th). Even so I took the boys to The Splash House for a couple hours.
Between 4:00 and 5:00 the family had arrived and helped put together Skye's chosen meal--fondue, the Koch way. I snapped a photo from the loft above so you could see what it's like. 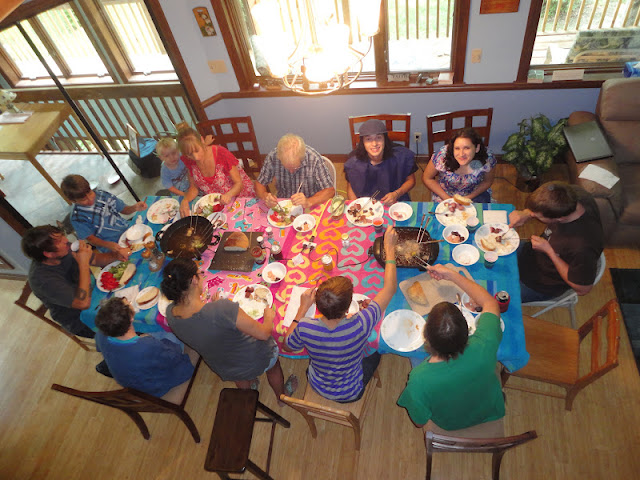 You do NOT want to hear the birthday song, however, well, unless you are a family member--the longer, louder and crazier the more honored you feel! 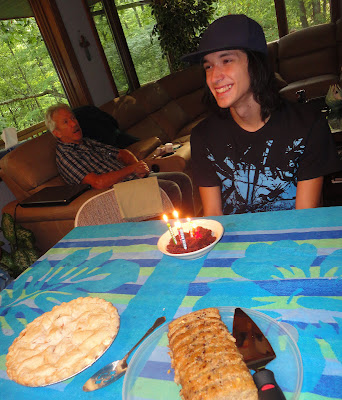 We didn't have a cake and he preferred the leftover brownies to apple pie and zuchini bread, so that's where we put the number 1 candle + five others. We had to be very resourceful, as you can tell by the beach towels in place of new table cloth for the oil-splattering meal.
Posted by riTa Koch at 5:44 PM 6 comments: Enlaces a esta entrada