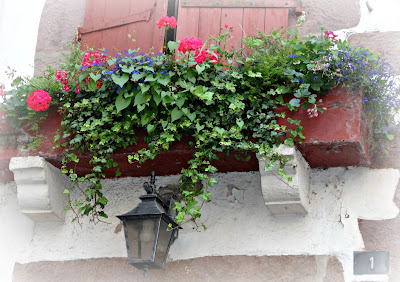 Feeling puny all week, but kept going with basic chores and one long-ignored unfinished project--the Circle Tour 2014 photos. This week was the one year anniversary of where I left off months ago dealing with each day of our trip through the Basque Country, so I have been looking back and posting the year-ago memories on Facebook each day beginning with June 18. My favorite is the team photo. 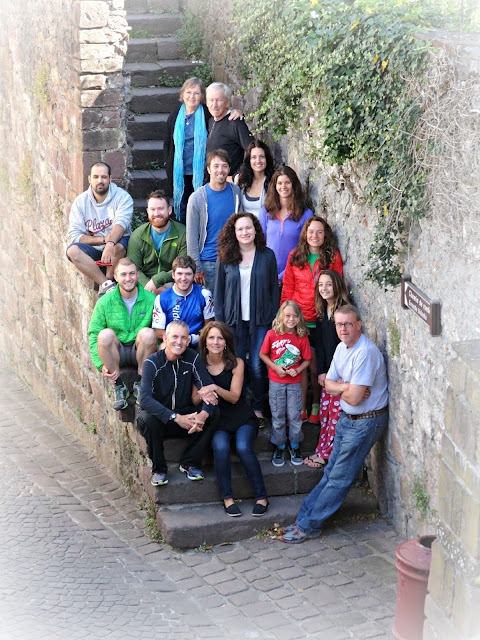 And Mike has been gone most of the time. This is the weekend of the robotics competition in Ohio. 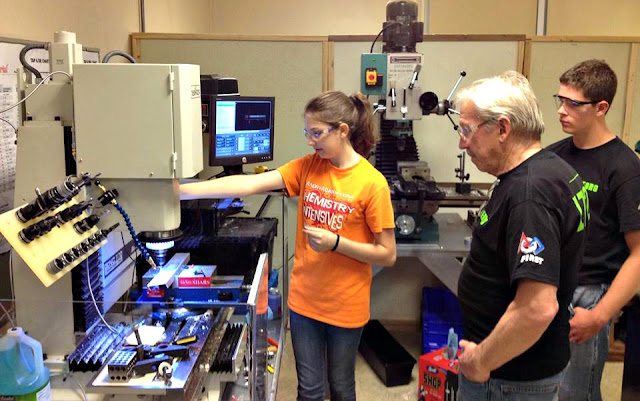 They (mostly Michael and a few students and mentors available during summer break) have been dealing simultaneously with two projects: set up the new CNC machine (read about it here), and improve the performance of the robot. Late Tuesday they realized that there were too many steps left to accomplish the latter before the CORI Off-Season Invitational, June 20th (happening as I write).
So at their Thursday meeting they had to back-track, replace the parts as they used to be, except for one aspect--it is faster now.Then they packed the trailer and finally got home by midnight.

Wednesday I learned that Aunt Berdine passed away at age 94. She was widowed 28 years ago when Uncle Harlan died suddenly at age 71. In recent years she suffered dementia but could still play the piano. 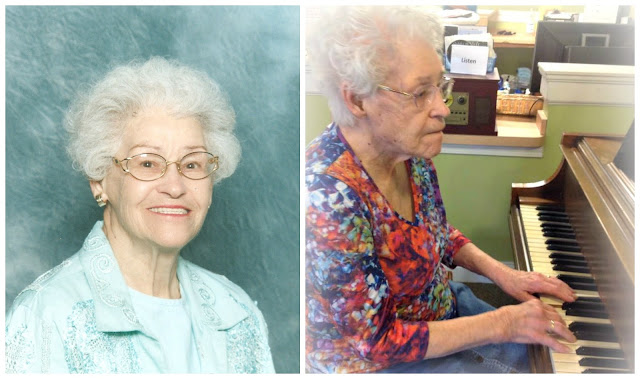 What a grand reunion in heaven. Only three of the Hirschy family remain on earth. Aunt Berdine is on the right and was preceded in death by both sons. She is survived by three daughters, 15 grandchildren, 11 great grandchildren and one great great! 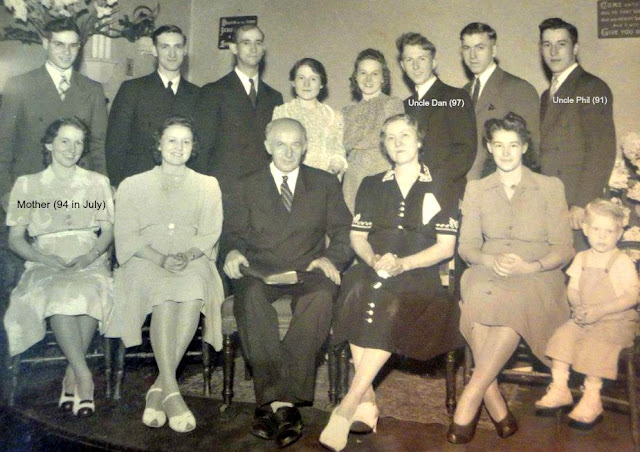 We did get out to the senior lunch at the Lion's Club, a special meal celebrating fathers, and an entertaining program--two local retired teachers reenacting Abbot and Costello's "Who's on First."

Dan Fuller, on the right, was our kids' English and Theater teacher at Eastbrook High School, and is now in my Writer's Bloc critique circle.

This morning I said goodbye to our student boarder off to visit his brother in Arkansas for a week. 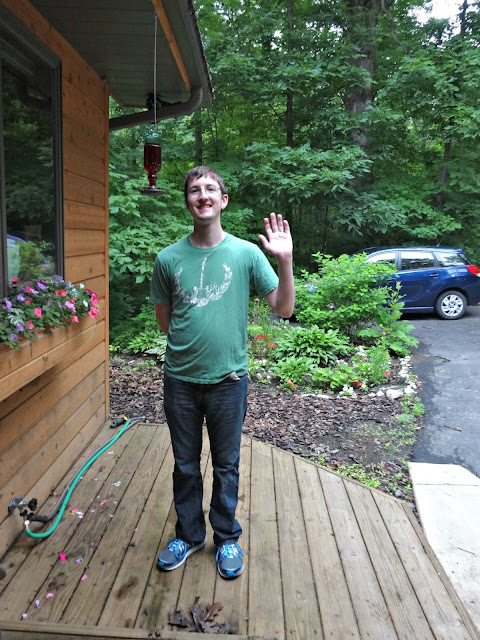 We've hardly seen him, either off to class at Anderson University or recovering from mental overload in his room. However, during meals or right after class I heard a LOT about what he was learning in the graduate-level course for music educators--First Steps in Music taught by renowned expert in the field, John Feireabend.
I must admit he kinda scared me with statements such as:
--If a child is not properly developed musically by age 7, it's too late!
--Pop music, too complex, or with a strong beat in infancy slows down or hinders musical development.
--Non-interactive screen time puts infants in a sleep/vegetative state that is damaging.

So, I'm reading a research-based article on how to develop the music intelligence of an infant, and even bought one of Feierabends books with songs and poems. Maybe I can use these bouncy rhymes with Rebecca.

Stephan and Karen celebrated the one-year anniversary of their move with a Big Ol' Shindig. They put leaflets on all the mailboxes on their road and several of their their neighbors showed up. Lots of friends stopped by. Come to think of it, I was the only family member that was able to attend. 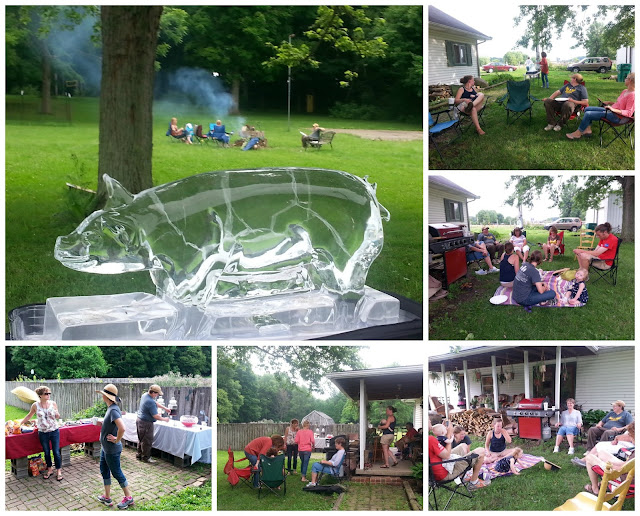 While there I heard that our robot and Team 1720 made it to finals and were the runners-up! Congratulations PhyXTGears for the best competition ever! 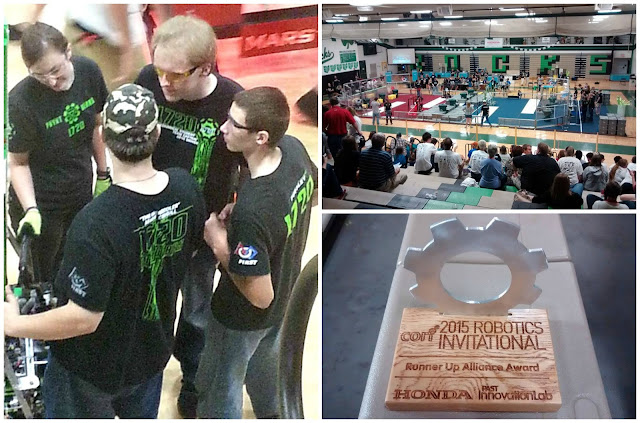 These photos were gleaned from Facebook.
Mike just got back, so I must go and hear the stories first-hand!

Next week we will be taking a break to celebrate with friends in Colorado. You may not hear from us for two weeks.
Posted by riTa Koch at 11:16 PM 1 comment: Enlaces a esta entrada

Sunday we attended the last of several graduation open houses this season for PhyXTGears' team captain. Ryan proudly introduced his sweet 97 year-old grandmother to us. 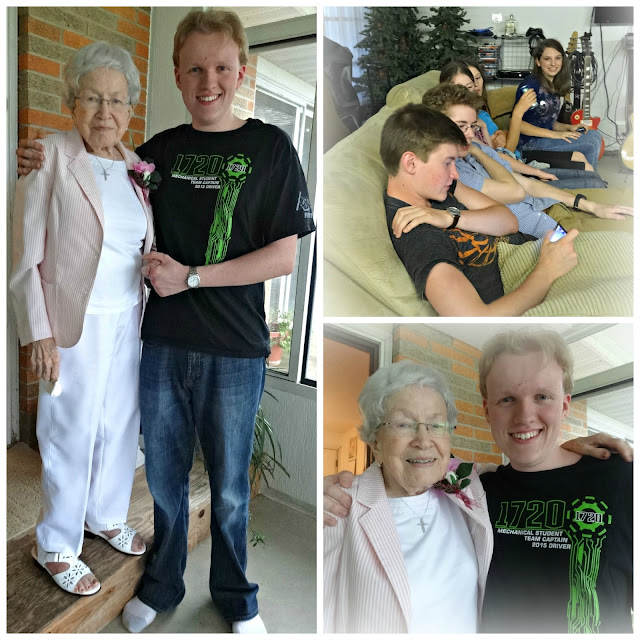 We stopped by the shop on the way home to see Mike's "baby". The last few weeks he has been intensely focused on all things robotics, mostly to do with the new piece of equipment, a CNC machine with all its parts, programs, and problems. As the poster at the shop warns, beware of any phrase beginning with the word "Just. . ." Nothing is ever that simple. 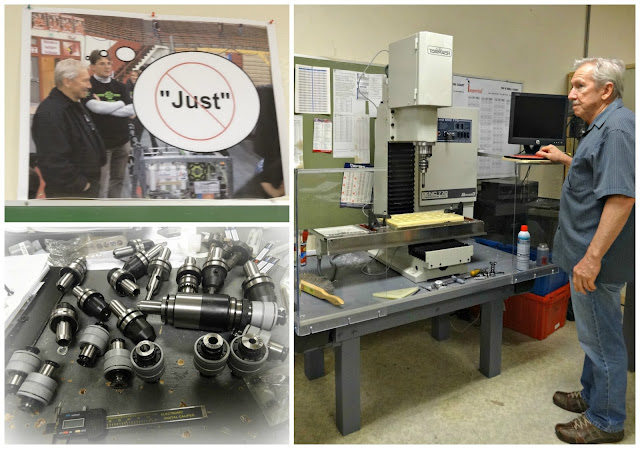 The robot's accidental name is proving quite appropriate. It is once again "Not Yet" ready for next week's competition. After all they learned and observed at World's, the team came back eager and ready to improve their machine.

Mike has gone in to the shop in Muncie every day this week, and I'm a robotics-widow once again.

Tuesday I joined the walking group and caught the rapidly fading glory of the azalea garden. 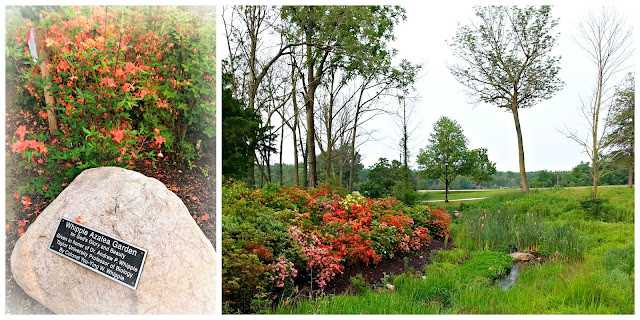 During the 4 or 5K walk I felt a hint of a sore throat coming on. It worsened throughout the day. Even so I accepted Karen's invitation to dinner, Stephan was back from Maine and Karen's parents were still there. The food and conversation were great. And the sunset on the way home was beautiful. 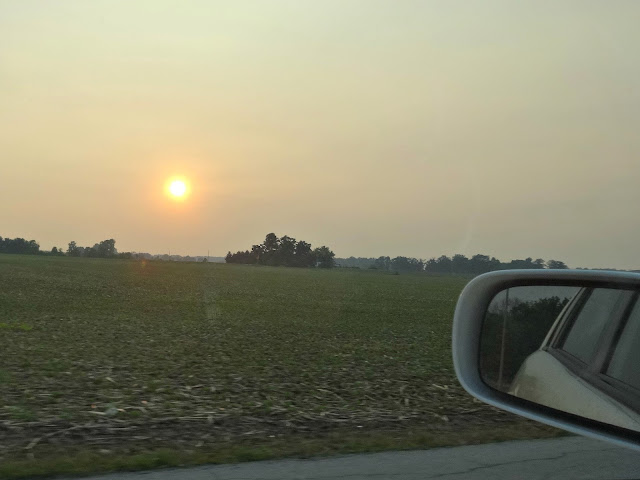 However that night was horrible and Wednesday was worse. I did nothing, nada, zilch, nichts. I did not even want to open my eyes. No photos that day.

Some of my readers comment that we try to do too so much. Sickness has a way of rearranging one's schedule. We cancelled a dinner engagement, I didn't go to tap class, nor write the weekly report that day as usual.
We were reminded that it was the fourth anniversary of our house fire. The microwave repairman said he'd been here back then. He was driving one of the tankers.

Our young friend, Jared, arrived in the evening and immediately offered me some of his healing essential oils to build my immune system--Thieves. I did sleep much better that night and have been on the mend ever since.

Thursday dawned bright and sunny. I enjoyed the sunshine from the inside. They tell me it got quite warm outdoors, but I was not ready for the outside world yet. 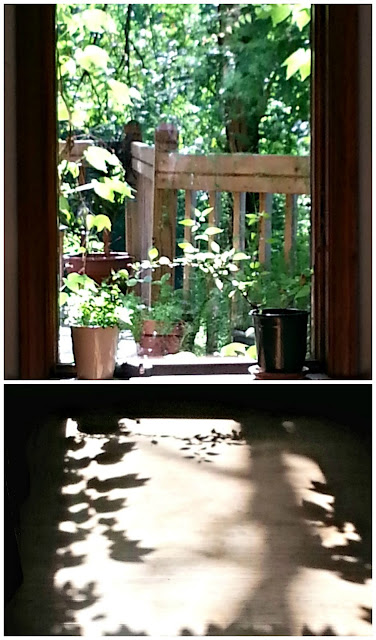 Jared is staying here while he attends a couple of summer courses at Anderson University.
It's nice to have some company and break the monotony with a game or two when Mike is gone so much. Can you tell which game we played? 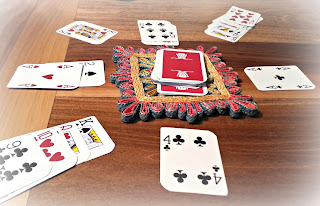 For lack of a Rebecca-sighting this week I had to borrow a photo Matt posted on Facebook.
(Is she sticking out her tongue at Daddy?) 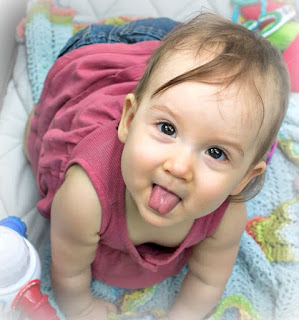 Today, Saturday, I ventured out to the Strawberry Festival. Look who was serving at the strawberry shortcake tent? Dane remembered four years ago, the day after the house fire, when he brought out tenderloin sandwiches and strawberry shortcakes for all to enjoy.

So it's been a slower week for me and Michael keeps plodding on, pacing himself, being careful, and thankfully has not experienced the same level or frequency of pain as last week.
Posted by riTa Koch at 5:33 PM 2 comments: Enlaces a esta entrada


As of this week school ended for everyone in the family.
Well, except Stephan who traveled to Maine last Sunday to attend the Fox Maple School of Traditional Building. We expect his next building project, sometime in the future, to be quite a bit more sophisticated than the cute outhouse. 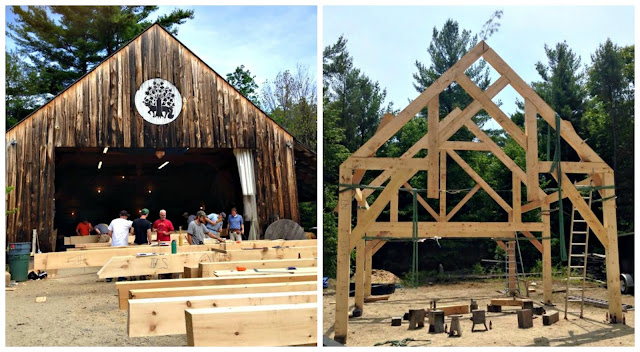 Monday, Karen had an emergency--no water--and imagined herself using the outhouse for a week! However, Mike and crew--Skye and his friend--came to the rescue and replaced the well water pump.

Stephan and Karen's 15th anniversary snuck up on them this week also on June 3rd.

Their wedding albums had become somewhat damaged by dampness and water, so last year I scanned all the photos and made a digital scrapbook.

My good friend Patryce, who for fifteen years managed The Loft Inn Bed & Breakfast, loves to entertain so she invited some of her closest friends to a very special tea, Tuesday afternoon. The excuse was to celebrate May birthdays, and for two retired teachers to reconnect.
We toured her former B & B and stopped to read one of the many articles published over the years. Patryce was aptly described as a Patrician Midwestern Princess. The afternoon was full of  surprises beyond the lovely "tea"--a beautiful poem recitation and a cello concert. Most of all we enjoyed meeting new friends. 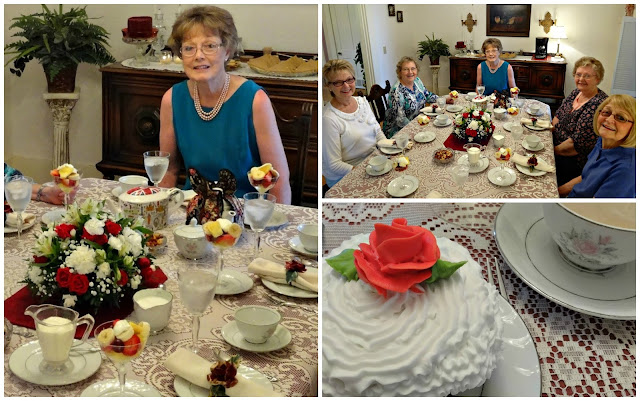 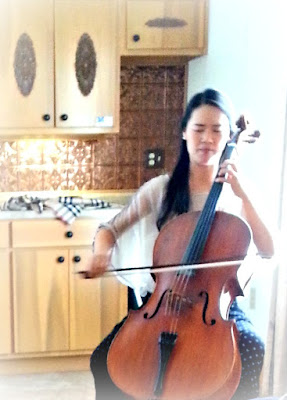 Grace Park is a delightful young woman from South Korea and a very accomplished cellist.

We asked her what had surprised or impressed her about our culture when she first came to America. Among other things she said that our common greeting "How are you?" seemed too personal until she realized it is similar to their own, "Have you eaten?" or "Did you have breakfast/lunch?" There is no expectation of a meaningful response. Grace explained that it was an expression of concern for the other's well-being dating from times when food was scarce.

Kristie had the opportunity to travel to Florida with her sister for a week. She left Wednesday.
As a family we pitched in to cover for her on the home front. 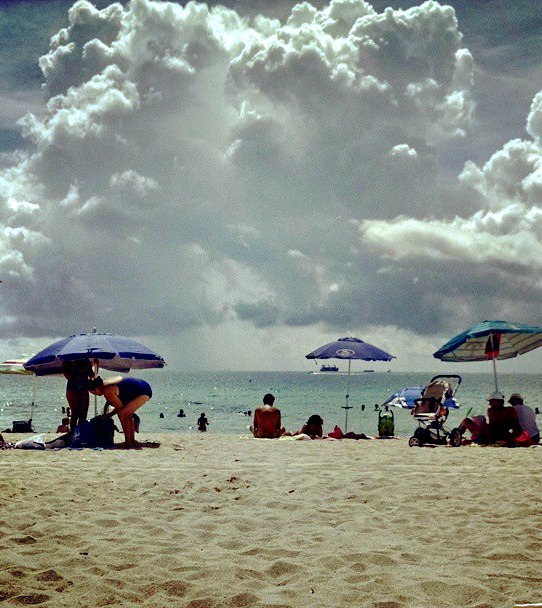 Elijah spent three days with us and joined in the annual Fun in the Sun program at our church the first week of summer break. His first day was "Mud Day", the second "Food Day." He volunteered from his team to be covered in shaving cream and attacked with cheese balls. His team won that one. 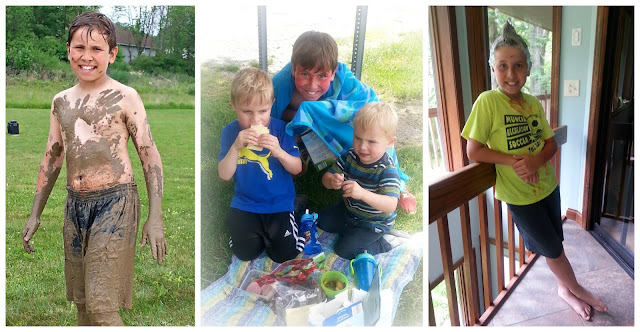 Thursday I picked up the little guys for a few hours of fun. They enjoyed the Upland school play ground and a picnic lunch at Taylor Lake where we got to see Elijah in the crowd of Fun in the Sun kids. 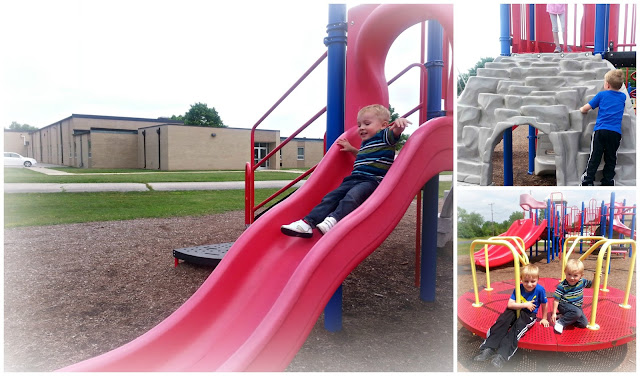 Super babysitter Malachi was able to have a few hours to himself and was just coming back from a bike ride when we drove in. 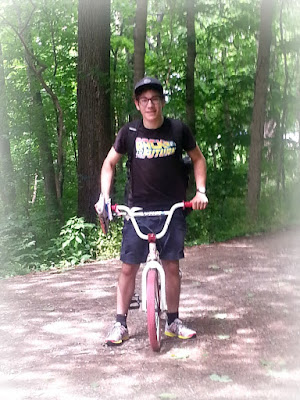 One evening we watched a good movie, McFarland, the true story of a cross country team in California that had a long winning streak that totally transformed their community.
Elijah also got to play at the Red Barn while grandpa was helping kids in the pottery studio. 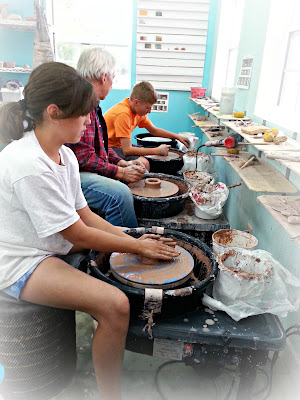 Friday we had overnight guests, a friend who is preparing to work with an orphan care ministry in Tanzania--Mavuno Village. Bethany came with her cousin to present her work at dessert evening. 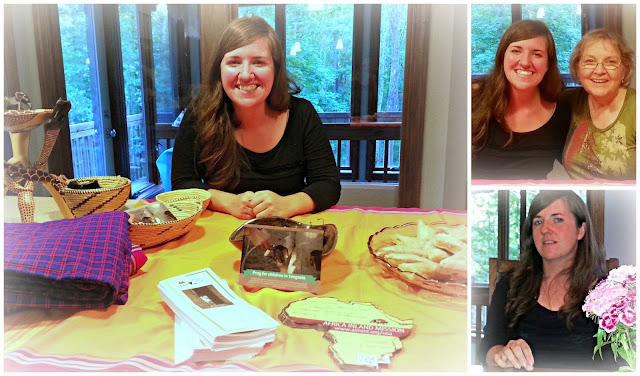 Saturday we wrapped up our full week with a fun birthday celebration for grandson-in-law Matt. He had felt left out from the time he married into our family. The first year our house fire was on that very day. The following years we were out of the country, in Spain. At last a proper Koch party!
His brother's family joined us which made up for our two families who couldn't make it. 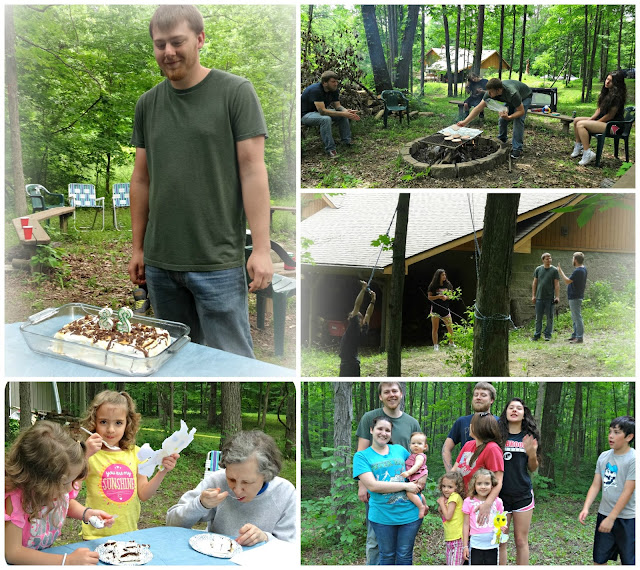 Last but not least, a Rebecca pic! 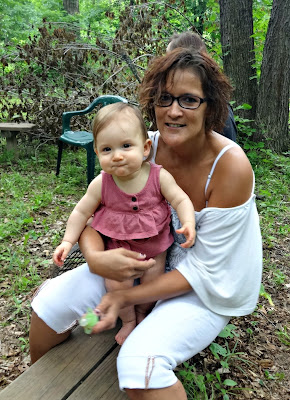 Note: when Nanna Leah is around, there is little chance that you will get to hold Rebecca!

A note about Mike: in spite of a steroid shot this week, he has had bouts of pain every day which limit his mobility.
Posted by riTa Koch at 5:23 PM 1 comment: Enlaces a esta entrada