It's time to explain my absence from blogging. 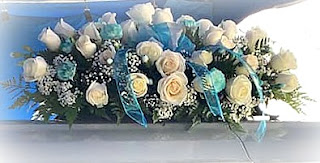 A week ago today, we laid our mother's tired body to rest.
We had said our goodbyes a week earlier.
Soon after the Grace Village Health Care Center was closed to visitors, we were informed that due to Mother's rapid decline we'd be allowed to spend time with her (after being checked and wearing masks, of course).
My brother Alan and I arrived there as soon as we could. From all appearances she did not have long. Like I had done with Dad in his last moments, I began to sing Psalm 23 and broke down after a few lines. I managed to finish the song. But Mother lingered long. We called our faraway siblings and together sang many songs and hymns from our growing up years in Argentina. With the phone close to her ear Ivan said his goodbyes. At that moment we saw the first response. She opened her one good eye and smiled as big as she could under the oxygen mask. Then we called Aldo and again she smiled. Alan was especially moved and grateful when Mother looked at him in recognition, no longer the glassy eyed look. Raquel was on the phone singing to her also. We treasure those moments of recognition and response. There were no more after that. Did her spirit depart at that time, we wonder? Her body took much longer to shut down.
We spent the night and the next day with her but there was no response. Slowly, so gradually her breathing slowed. We went home Sunday night and got the call Monday morning from the nurse who held her hand as Mother's breath faded away.
We rushed to her side again. It was time to call people, make plans for funeral and burial, and pack what was left of Mother's things. Death is NOT pretty. We focused on images of Mother's new reality--the joyous welcoming party in heaven and her release from all the frustrating limitations and infirmities. No longer would she mouth the words, "I can't walk; I can't talk."

Alan and I met with the overwhelmed funeral director--three funerals by noon, a record day! Even so, he was extremely helpful in sorting out the details and complex options of our times. Meanwhile phone calls and messages crisscrossed the country in an effort to put together a meaningful celebration of life service.

Aldo (sibling #3) and Alice were able to make flight arrangements from Denver, Colorado, and arrived Wednesday night. We had a day together to work on the program and enjoy their fellowship including a visit to meet our second great grandchild born on the same day as Mother's passing.
I've dubbed March 16 as K-K day - Kathryn went to her heavenly home, and Kalani entered his earthly family. There is another sweet connection between Skye and his great grandmother, they have the same birthday- July 29.


Kathryn Ruth Hirschy Hoyt's memorial service, Friday March 20th was unusual and memorable, the last public funeral for a while anyway. It was held in Alan (sibling #5)'s church in order to live stream for all those who could not be there. As it was we had only sixteen attendees, mostly family.
Each of us shared memories. As the oldest, I was first and spoke more about the beginning of her life and ministry. Ivan (sibling #4) and Kim shared via video.
My youngest brother, almost nineteen years difference, came along when I was about to leave for college. He told of difficult and stressful times in my parents' life.

We shared stories from different periods and perspectives, so many that the service had to be interrupted in order to proceed with the scheduled burial in a timely fashion (and avoid a stiff fine!)

The family pall bearers made up almost half the congregation! Pastor Aldo handled the committal service beautifully.
And we headed back to the church to continue the program. No problem, we had plenty of time before the meal, except that the sound and video guys had to leave, so we do not have a recording of the last part--Aldo's memories woven into his pastoral message.

We had talked a lot about the music Mother would have wanted. We had great plans and ideas, but in the end they all fell through. I had found among my parents many papers, fifteen copies of Until Then and took them along. Perfect, just enough for everyone there so we sang together with Alice accompanying us on the piano. What a great message to carry us through until we rejoin our family members who've gone ahead. 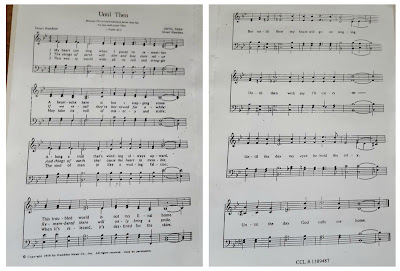 We are so grateful for the way everything came together to honor our mother and learn from her life of faithfulness. Alice mentioned that as she was studying Proverbs 31 with a friend, she realized that all the qualities applied to Mom. And in keeping with verse 28, we all rose up and called her blessed!
Posted by riTa Koch at 4:53 PM