I hope you enjoy Cousin Karin's Sunday bouquets as much as I do. She describes them for me as well.

"This is my first bouquet of gladiolus. There are at least seven or eight colors in this bouquet, but these may be hard to see. The red one is my first. I have not had red before. The ones in the front look slightly wilted, but when you actually see them, they are small with ruffled edges, and they have three colors (peach/yellow/reddish brown). Glads tend to be a  bit unruly for me. They do not always grow straight, and in arrangements, then tend to turn, but the colors are always lovely." 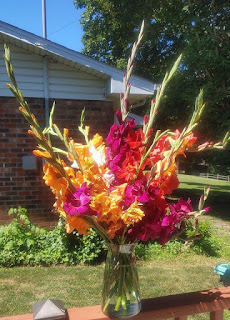 Lovely weather here lately, though sometimes hot. I walked with a friend Monday evening.
Michael goes on bike rides often, taking into account the weather and the direction of the wind. This photo, however, is from 2014. So many happy memories have surfaced lately of our two trips around the Basque Country during the month of June. 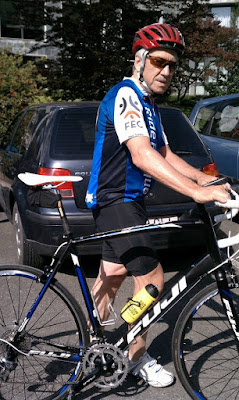 This week our focus has been on Leah's cancer journey. Tuesday she was admitted for surgery--a mastectomy. An overnight stay turned into a week-long lonely and painful saga. The bleeding would not lessen and the blood count was going down. Saturday began with her arm swelling out of proportion, and then became a long day of fighting with needles and IVs to replenish the magnesium, potassium, plasma and blood supply. Followed Sunday by a second surgery to fix the bleeding problem. The pain that afternoon and evening was excruciating. Thanks to technology we were able to video call, "be there" and advocate for her when she was in no condition to speak up for herself.
Leah has a very high tolerance for pain. Her positive attitude and good humor amazed us and blessed all those around her. 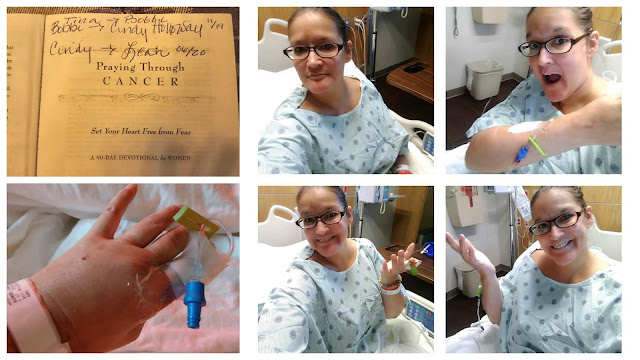 Meanwhile, in Pennsylvania, a dear aunt was hospitalized and in critical care, and alone much of the time. God took her Home, Tuesday June 10th. I took this photo a little over four years ago when her husband passed away (uncle Phil, Mother's youngest brother). 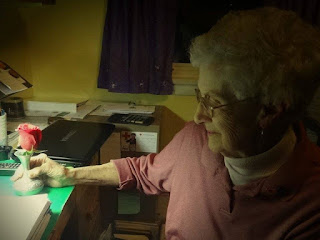 That was also the anniversary of our house fire, nine years ago already! The tree sculpture reminds us of that event--the half-burned old oak tree stump that son Stephan carved into a monument of gratitude to God for the lifetime of blessings. Sadly, it is deteriorating over time and several of the meaningful icons are disappearing. 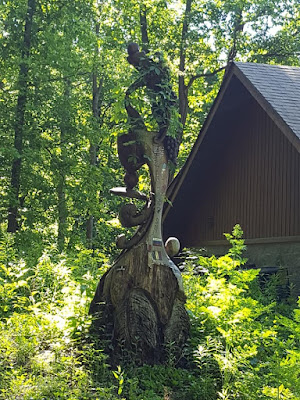 Wednesday's strong winds knocked down a large tree across the lane and led to a neighborhood chainsaw and clean-up party. 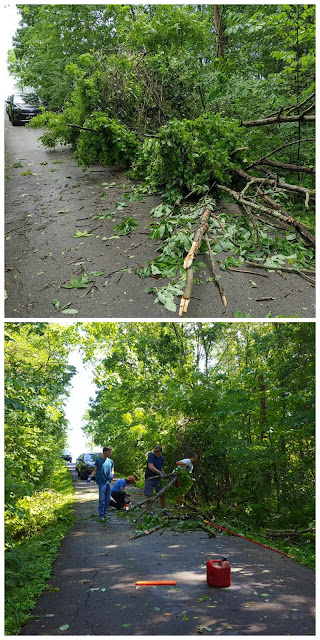 A blog post is not complete without a picture of one or another of the young'uns, so I borrowed these Kayla took during a walk while looking after Kalani. 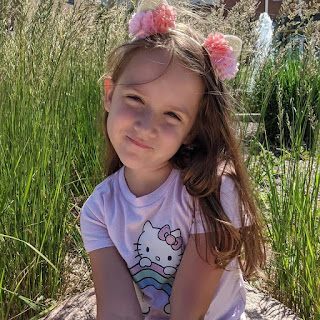 What has kept me occupied and sane during this period of waiting every day for Leah to be discharged and not allowed to visit?
Among other things, I continue researching digital archives that are helping to fill in the missing pieces and put together the story of my parents' mission in Argentina as well as the history of the Hoyt family within the Grace Brethren Church.

And I finished a knitting project this week. I enjoy using up every last bit of leftover yarn. Knitting can be a relaxing activity at the end of the day. 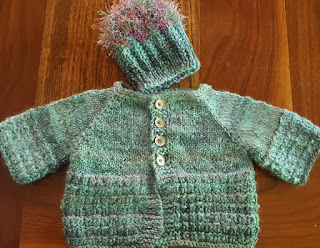 Finally, let me share these images from an old hymn. As a writer I was moved, as we sang, by this attempt to describe the love of God.

Could we with ink the ocean fill,


And were the skies of parchment made;
Were every stalk on earth a quill,
And every man a scribe by trade;
To write the love of God above
Would drain the ocean dry;
Nor could the scroll contain the whole,
Though stretched from sky to sky.


How have you seen God's love carry you through this week?
Posted by riTa Koch at 6:02 PM