A week of remembrances: Holy Week to meditate on Jesus' last week on this earth; the annual Seaman memorial; ongoing condolences for friend and coworker from M/V Doulos, Em Namuco from the Philippines; photos and posts about the visit of the new OM ship, Logos Hope's visit to Uruguay; and the surprise visit of a family friend who grew up with our kids. 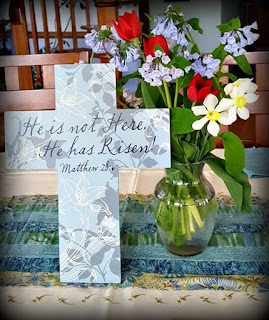 The fifteenth Taylor University Chapel in memory of Richard A. Seaman was followed by a special luncheon with family and friends. We look forward to this inspirational event and to reconnecting with the family each spring. He was a beloved business professor who impacted many in his short life. He died suddenly at age 42. Ironically, this memorial coincided with tax day. 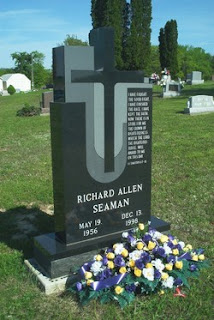 In this old photo we were celebrating Em Namuco's 35th birthday in Santa Rosa de Calamuchita, at my parent's home in Argentina, forty years ago. We were there with a team from the ship Doulos. Our children were 8, 6, and 7 months. And my youngest brother Alan, in the middle next to Em, was only 16. So many memories. 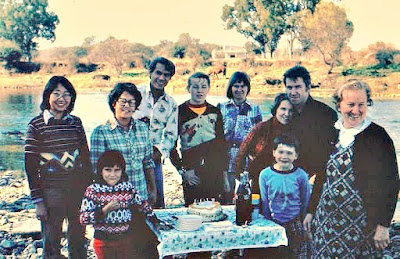 Eduardo Wojnarowicz (on right) was a member of the Doulos Singers forty years ago. Their music touched many hearts, however, the greatest impact was on their own lives. Eduardo was thrilled to be able to visit this newer ship. Here he posed with ministry leaders onboard, Randy and Kimberly Grebe. They have stayed in our home a couple times! 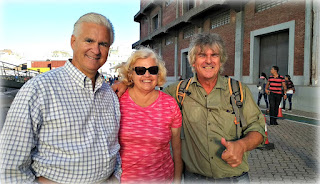 Kyle Doane moved away a long time ago, but he has always been a good friend to Leah, in fact he is Kayla's godfather. 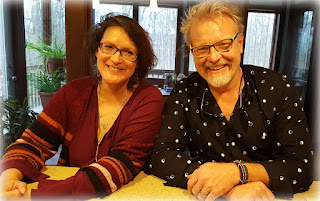 So Holy Week began with Palm Sunday and a special Kiddie Kampus program with Rebecca and all her preschool friends singing excitedly, expressively. So cute! 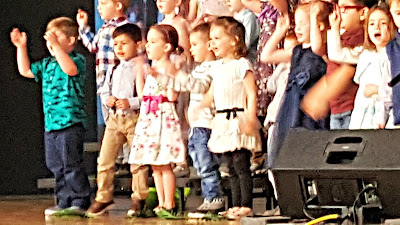 Maundy Thursday I was thinking of one of the last things Jesus did with his disciples when he knew his time had come--He washed their feet, and urged them to do the same (John 13). I am reminded of two things: the daily cleansing available to us from taint of sin, and Jesus' commandment to love one another. 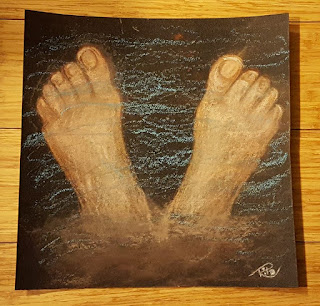 
This is Easter season and a big one here in the Argentine. Last night at 6 o’clock (Good Friday) we put Rita in her cart and went up to the main street to see the big parade. It looked like all of La Carlota was there to parade the streets in hopes of saving their souls. The procession began with a boy carrying a cross. He was dressed in a fancy white cape. Behind him came about 75 children dressed in their best clothes. Next in line came men and women carrying lighted candles, chanting as they went. All the women wore netted veils. Throughout the whole procession were three images. These they bore on staves like the Israelites did the ark. The first image was of Christ, the second of Mary and the last of Christ resting at the foot of a cross after His death. The priest walked before the last image and at every street crossing he would stop the image and chant off a few lines of something. . . On a cross out in front of their church is written in Spanish “Save your soul” so I suppose they were in the process last night. . . Mrs. Dowdy told us that every year they bury or go through the act of burying Christ and some people actually think that the Lord dies every year.

Saturday, Michael and I visited Mother in Grace Village. Brother Alan and nephew Daniel joined us in the main dining room to celebrate Easter with her. It is always good to catch up with one another. The big news was that Daniel is moving in June and will be taking up a new career--culinary studies. 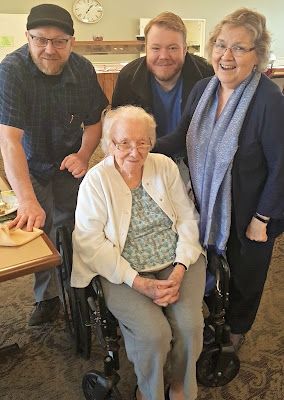 On Sunday our family got together to celebrate the Resurrection. There were many precious and memorable moments. I can only highlight a few. Our little ones entertained us delightfully.

Jude is in Kindergarten, already reading well. He read us the Easter story.

Zion loves the book I read to his third grade class and wanted to read it to the whole family. He did so with great expression.

Then Rebecca danced for us (with Kayla's coaching, of course) as a celebration response.

Michael told us of an Easter Sunday long ago, probably 45 years ago, when he and Bob Craton were in Turkey to make a documentary. Interestingly, Bob wrote about the same memory.

Christ is risen! Many years ago I celebrated Easter in an Armenian Church in Eastern Turkey. Many members of the congregation remembered relatives and friends who were martyred for their faith during WWI. One woman told me how her father, brothers, uncles and cousins had sung a hymn as they were marched away to their deaths. Christ is Risen had a meaning to that congregation that most of us American Christians cannot comprehend.

Michael added a few other aspects of that memorable experience. The host served everyone from the roasted lamb by tearing off pieces and handing them out, no utensils needed. Their home was part of the jail complex where the condemned men were held. Another memory of that march to their end, was the sound of the women making the high-pitched tongue-trilling sound for celebrations--the kelele (?) Martyrdom ushered the men into the presence of the risen Christ.

He is risen indeed!
Posted by riTa Koch at 5:20 PM