In the process of unpacking I found the perfect place to display the wedding veil--at the bottom of the stairs next to Mother's wedding dress and on one of Michael's sculptures. 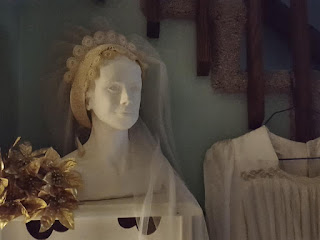 Post Christmas events and clean-up:
--the Schlenker gift--Sunday after church Moriah took us out to eat at a favorite restaurant.
--Karen used one of Mother's art cards for her beautiful after-Christmas thank you note.
--all the Christmas decorations come down on or around Epiphany, January 6

January 6 was also departure date for several of the J-term Lighthouse teams, including Moriah's.

Monday Night Dinner was livelier than usual with three additional guests and a repeat performance by Stephan and Karen of the "Mike and Rita song" they wrote for us. (I so wish you could hear it, but can't seem to transfer the video.) 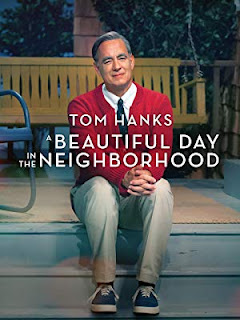 What a powerful story, described by one reviewer as:

. . . a dramatic profile of a quiet, gentle, self-effacing, and genuinely kind man--a legendary children’s entertainer who, in his own words, devoted his life “to the broadcasting of grace through the land.”

As a writer I just had to read the feature article by Tom Junod, basis for the film--Can You Say...Hero?

Our family experienced a touch of fame this week.
Thursday morning early I began hearing from friends that they had seen Stephan on the news. He organized the Ice Festival in Carmel and was interviewed multiple times.


Meanwhile, downtown Indianapolis, at the State House, the opening act of the session was to pass a Resolution recognizing the positive impact and achievements of Indiana FIRST, and later named specifically the PhyXTGears and Mike Koch! WOW!

Cute little Space Walrus made a final appearance and even had a fun interaction with the Speaker of the House. The latter enjoyed it the most, given that robots have no emotions. (Find the robot in the photo.) 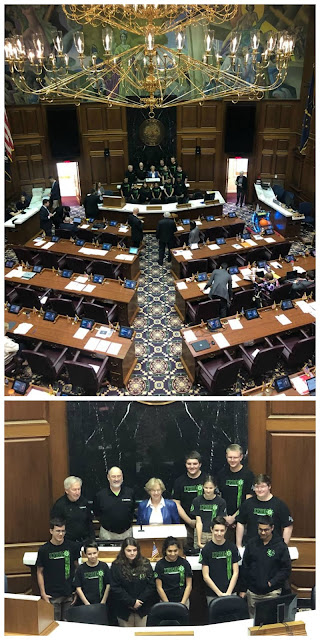 Where was I all this time? Certainly not being interviewed for TV, nor being recognized by 28 or more state representatives for any contribution. I was spending time with two 98-year-old women who dedicated their lives to serve and glorify God in Argentina. Their reward is yet to come. Earthly limitations increase as heaven draws near.

Thursday's expedition to the State House did not interfere with the team work session that evening. Multiple prototypes are popping up. And everyone is learning and having fun, young and old! 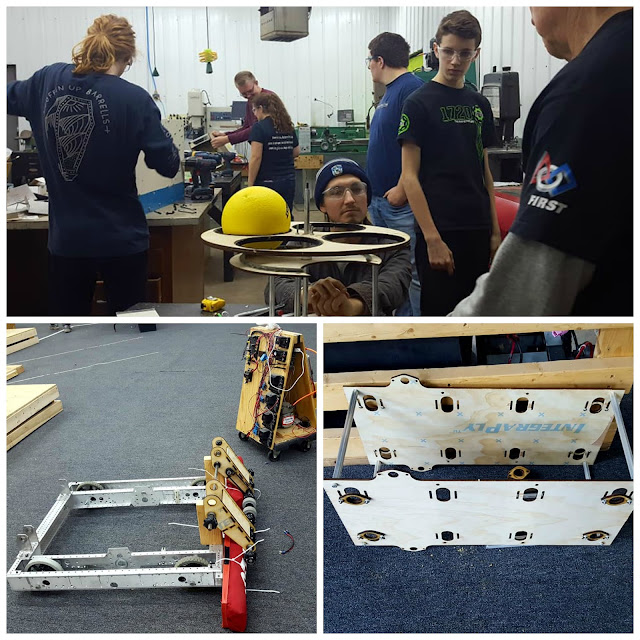 Another Stephan interview at the end of the Ice Festival. 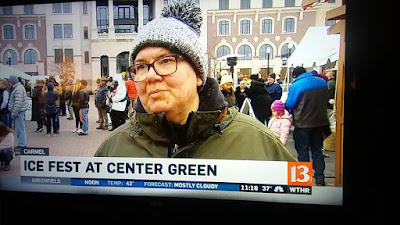 The weather did not cooperate with the planned schedule. Due to torrential rains and mild temperatures, the main carving competitions were postponed a day. The carvers worked through the night, starting when the temperatures were low enough. The event proved exhilarating, but mostly exhausting!
Posted by riTa Koch at 11:33 AM