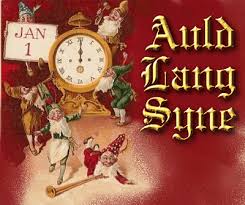 The title means "old long since" or "days gone by" from a poem penned by Robert Burns, a Scottish poet, in 1788.

To transition from Christmas to New Year, I decided to share a long ago holiday memory my father wrote years ago remembering college days and his first Christmas break.

In 1939, my brother Lowell and I decided to attend Bryan College, he as a sophomore and I as a freshman. Bob Culver, a brother-in-law, took us from Winona Lake to the center of Warsaw to board the bus for that 500 mile trip to Dayton, TN. When Mother kissed us goodbye she placed an envelope into our hands. When we opened it, we found 12 dollars she had managed to save for us. That was all we had for starting our college experience. The months flew by and soon came the time for Christmas vacation. With no money to purchase tickets to return to Winona Lake, we resigned ourselves to staying on campus and firing furnaces to earn our board and room.

A day or two before Christmas, to our great amazement, a car from California with an older brother, Rex, and his wife, Laura, appeared on Bryan Hill. They had moved to California just a few months before. Now they decided to return East for Christmas and pick us up also, but with no previous word. We were soon on our way and arrived in Winona Lake very early Christmas morning then decided to announce our arrival by playing a Christmas carol on our horns outside Herman's large rented house on Chestnut St.

To be sure, we were all happy to see each other, but this sure complicated things for Herman. He was already taking care of Mother, two brothers and a sister who had not yet found a place to rent. I can still see Herman doing his best to help with household chores including the wash with the old wringer-type washing machine of those days. Since there was not sufficient room in his house, my brother-in-law prevailed upon his landlord to let us sleep in one room in the same house where he was renting an apartment. What an ice box!! Rex and Laura who had continued their journey to Ohio to visit her parents picked us up on their return trip and took us back to Bryan College.

Lowell and I heard later that when Bob Culver took us to the bus in Warsaw for Bryan, he was thinking: These boys are either big fools or they are boys with extraordinary faith. Well, we didn't have extraordinary faith, but neither were we fools--just look at the wife the Lord had prepared for me there!

Interestingly, both siblings Lowell and Solon (my father), met their future wives at Bryan. In fact, the brothers and the two young ladies from the same church in Evans City, PA, were part of a sought-after vocal and instrumental quartet!

This memory seemed appropriate as we prepare to welcome students back from Christmas break. This time, not one, but two young women returning for their last semester.

Kendra, who grew up in a missionary family in Cambodia, joins Moriah who has been with us since her freshman year.

My greatest accomplishment of the week was to clear out the craft/junk room in preparation for its new occupant. I accomplished this great feat while listening to three good books.

What has God prepared for these young ladies and us in this new year?